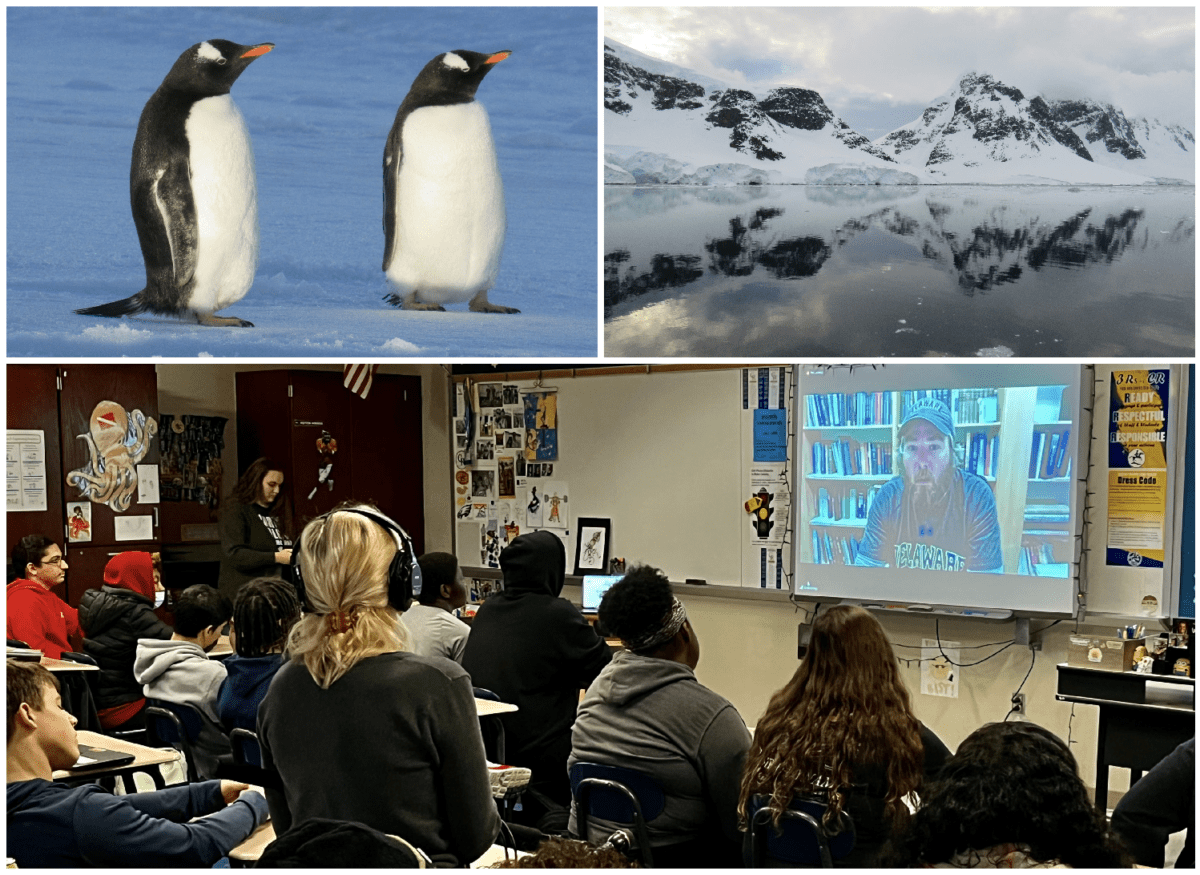 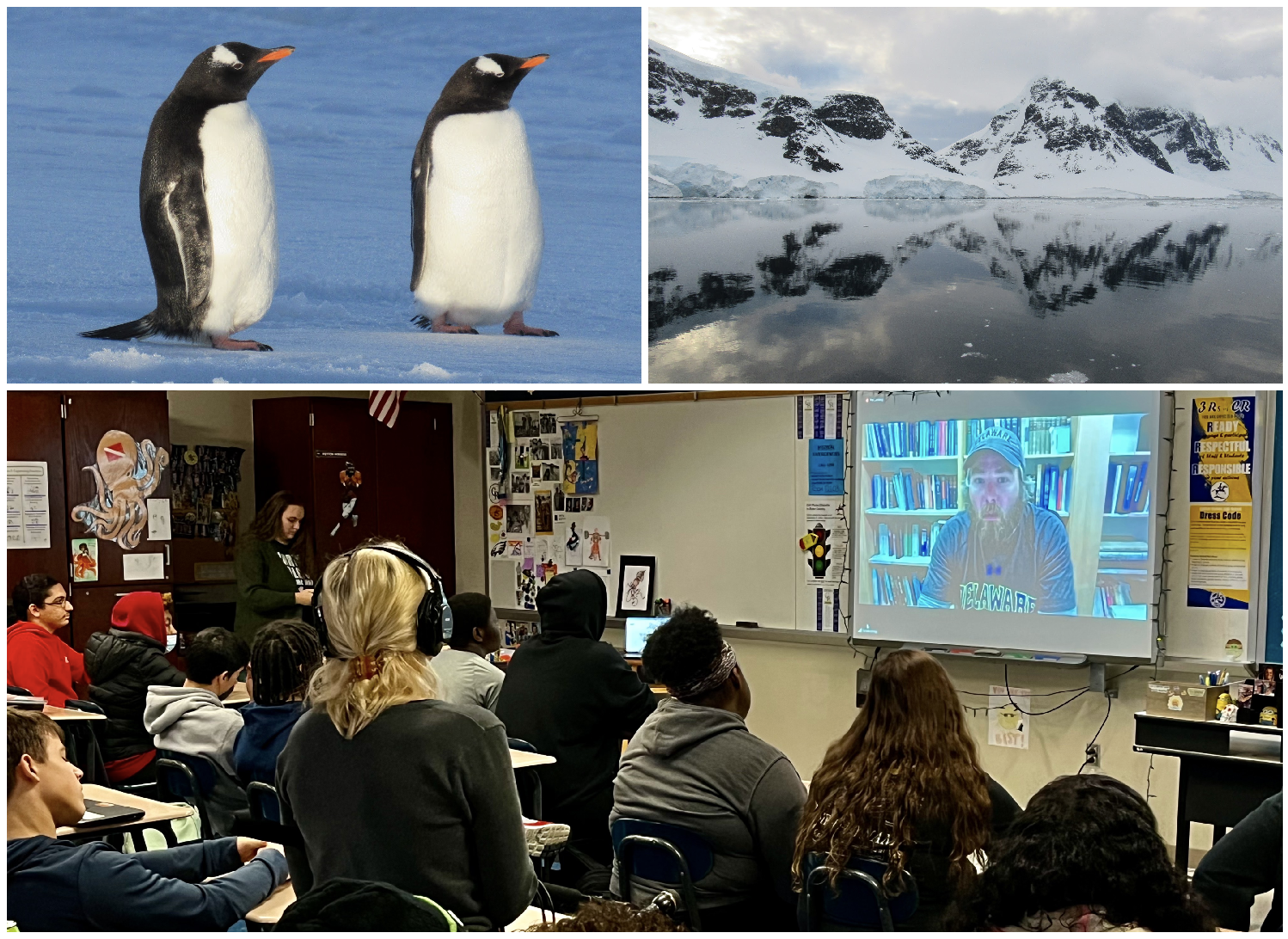 You read that right.

The students were connected online to a group of University of Delaware researchers down at the pole.

“I really liked learning about how global warming is either affecting or helping certain populations of penguins in Antarctica,” said senior Ella Wadhams. “When they were talking about the submersible vehicles that you use, we talked about vehicles like that in class and it was interesting to actually see them being used in real life.”

UD’s team in Antarctica is examining penguin-prey feeding habits of the Gentoo and Adélie penguins to show the impact climate change is having on these systems.

About 90 students gathered for the online event.

Christine Taylor, a Caesar Rodney High School, said the classes have just started talking about  what’s happening in the ocean and how it affects the food chain.

Krill are invertebrates classified as phylum arthropoda, which Taylor’s class will be studying in the coming weeks.

It took the team of researchers 10 days to travel from Delaware to Antarctica. They went through the Drake Passage, a straight underneath the southern tip of South America.

“That was not fun,” said researcher Matt Breece, who said his ship faced 30-foot waves in the passage.

The team has been working at Palmer Station, an American research base on the northern tip of Antarctica. 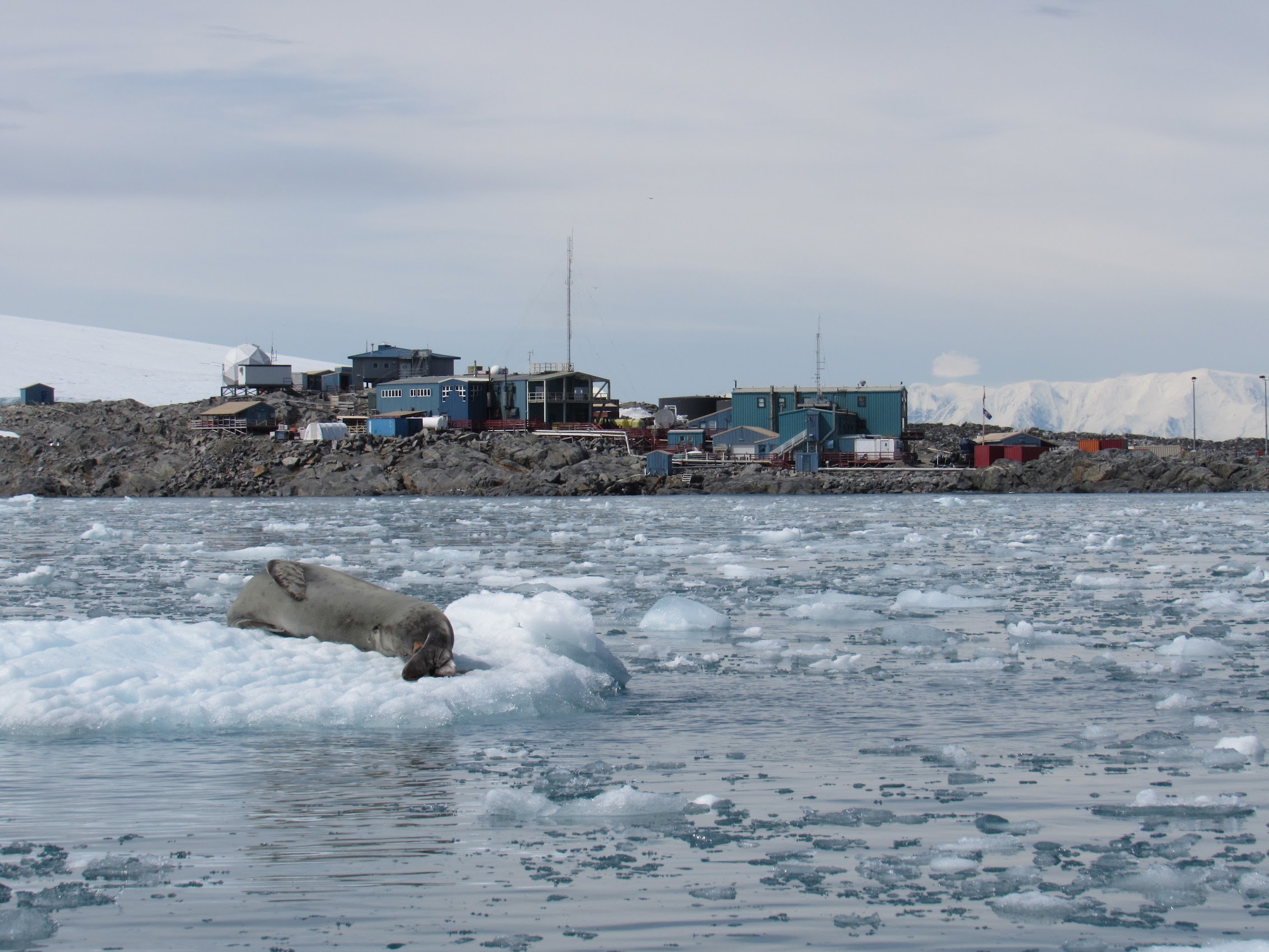 A seal on a sheet of ice with Palmer Station in the background. (Matthew Breece/University of Delaware)

“In addition to the IT people we have here, it’s essentially a little small town,” Breece said. “We have two cooks, we have an electrician, a plumber, a carpenter all on the station.”

UD’s team of researchers is expected to leave Palmer Station Feb. 1 and return home by Feb. 9.

Palmer Station is located in one of the fastest warming places on Earth right now, he said.

That’s been especially bad for the Adélie penguins who like to live near sea ice.

The penguins also like to raise their chicks where they themselves were raised, but with ice coverage waning drastically in the past decade, there are fewer places for them to raise their offspring.

This has caused their population to decline, according to Breece.

Breece said the research team is now working on compiling data with their submersible vehicles and satellite tags in order to identify what areas of the ocean have the highest concentrations of krill to track migration patterns of the prey.

He likes best the Chinstrap penguins, who are closely related to the Gentoos, since “they are funny and seem to be more curious than the Adélies.”

Caesar Rodney senior Damon Grant said the presentation helps bring to life what he and his classmates are taught.

“I think it’s really cool because we don’t really get to see those types of animals in our daily life,” he said. “You really have to go off the grid to interact or see them, and their team did that.”

He enjoyed the program.

“It’s a really valuable learning experience because we were able to learn from professionals and not just from a book,” he said. “That made it interactive and it resonates more with me.”

Taylor said her class recently received new textbooks with a chapter dedicated to climate change and how what’s happening to the Earth’s oceans has a residual effect on all of the planet’s land and animals.

She pointed out that coastal flooding in the First State often causes towns to shut down.

She was happy Breece talked about the effects of less food on other sea life. If the krill population dropped, that would have a great effect on penguins, whales, sharks, squid – animals with which the students seemed more familiar.

“It was great to see him talk about how a lot of their focus is on krill, and even though they’re there to study penguins,” she said. “If penguins don’t have food to eat then that’s going to affect everything else.”