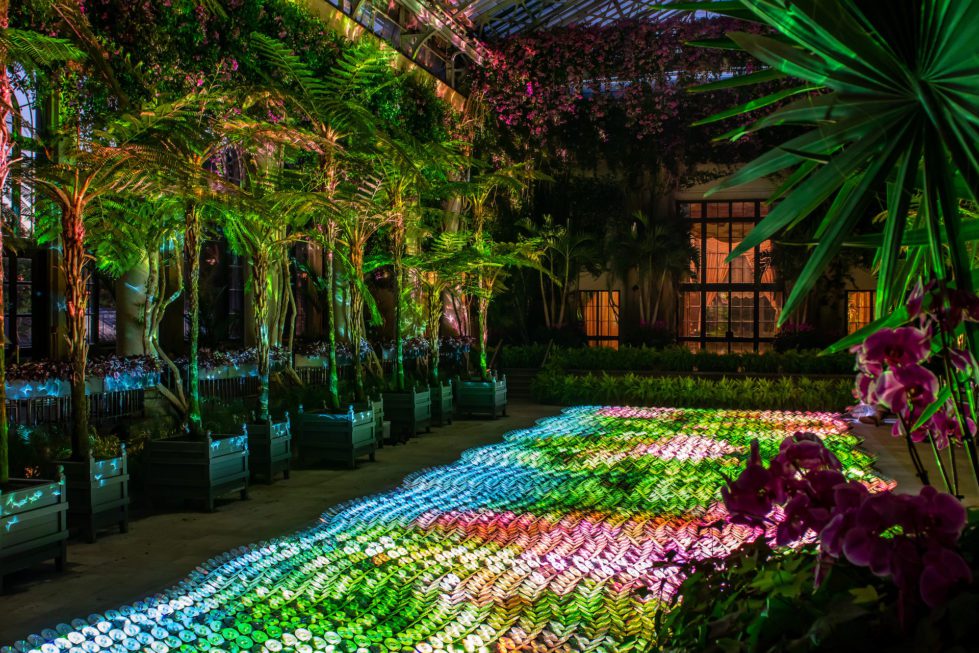 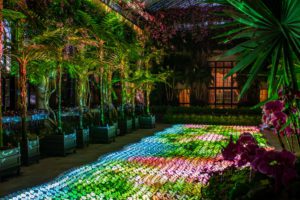 Bruce Munro’s C-scales is an installation in which a film projected onto a lake of 8,960 CDs, mimicking Longwood’s water gardens. Photo by Hank Davis.

When light artist Bruce Munro this year brought his night magic back to Longwood Gardens, it was the first time he’s brought a new exhibit to the site of a former one.

It also electrified his career, partly because Longwood invited directors of gardens all over the country to see the exhibit and meet Munro, just as his connections in England and Australia were starting to blaze.

Suddenly, he had a ton of work.

“You’ll always be on my Christmas cards list,” Munro told Paul Redman, Longwood’s CEO, back then.

Now Munro, who has dual English/Australian citizenship, is back with “Light: Installations by Bruce Munro.” It includes eight installations, three inside and five outside.

“It’s like coming home and seeing old friends,” Munro told Delaware LIVE News, “not only the lovely people who work there, but also the amazing landscape.” 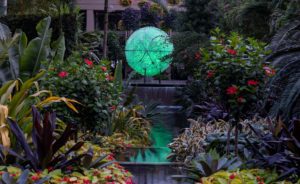 In the East Conservatory, Green Flash is an 11.5-foot sphere of 1,820 bottles—each filled with a single fiber optic cable—that slowly changes colors while mimicking a rising and setting sun. Photo by Serena Munro.

Munro, 63, says he’s been sketching ideas since he was 16, when an art teacher gave him a stack of sketchbooks. He considers them private and won’t allow others to look at them.

The urge to create has been with him all his life, he said.

His road toward light installations began in 1985, when he pushed aside his ideas of a fine art career and started an illuminated display business in Sydney. He sold it in 1989 and went to work for the new owners.

By 1992, he and his then-fiancee, Serena Ludovici, had decided to move to England. Before they did, they went camping around Australia. At Uluru, a large sandstone formation, in the middle of Australia, he was amazed at the connection he felt with the space and with live.

“I wrote a whole lot of things in that sketchbook but I had these thoughts and feelings about the landscape and how powerful it was and how it made me feel,” Munro said.

Already working in lights, he suddenly had the idea for an artwork that would bloom at night, like dormant desert seeds responding to rain.

Munro had planned to paint when he returned to England, but it wasn’t lucrative.

The birth of their second of four children sent him back into the commercial world with a tile company. Ultimately, he began handling unique residential projects using paint, tile and lighting.

Then his father died in 1999. Munro was devastated and briefly set adrift emotionally, dwelling on the moments when he felt profound connections to people and places and life itself. 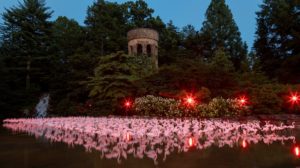 1,000 flamingoes wade in the basin near the Chimes Tower in Ramandu’s Table. Photo by Serena Munro.

“Essentially, what I’m trying to achieve, whether it’s at Longwood or another venue is always the same,” Munro said, “and that’s simply to express thoughts and ideas about what it is to be alive, and, hopefully, celebrate that in some way and allow people to to join them and share that that experience.”

While his installations draw from that sentiment, they also have very specific connections to his life.

He points to the new Ramandu’s Table installation in the pear-shaped basin near Longwood’s chimes. It contains 1,000 plastic flamingos that are constantly changing hues, including a brilliant pink.

The name of the piece comes from C.S. Lewis’s “The Voyage of the Dawn Treader.” In that story, an old man named Ramandu is actually a fallen star. Each day he sets the table for a flock of birds who visit and feast each evening.

The idea for including flamingos was sparked by Munro’s father giving him a  plastic lawn flamingo after a trip to the United States. Munro was fascinated by it and learned what he could about its creator, graphic artist Donald Featherstone, who has since died.

Munro is known for his field of lights, which are huge installations of lights set out in shapes. This year’s Field of Light will feature 18,000 illuminated stemmed orbs lit by fiber optics along the Large Lake.

In Longwood’s orchard, SOS is an illuminated path of 162 rectangular baskets made with galvanized wire, synchronized to the tuning of an old radio.

Gone Fishing features three 15-foot diameter structures, each formed by 100 lit fishing rods, and all reflecting on the surface of the Small Lake.

Indoors, a three-and-a-half-meter geodesic sphere of 1,820 empty bottles radiates in the East Conservatory in Green Flash.

Nearby, Munro has created C-Scales, a lake of 8,960 shimmering CDs in the exhibition hall. 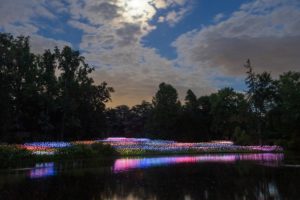 Along the path near Longwood’s Large Lakes, a luminous Field of Light features 18,000 illuminated bulbs. Photo by Serena Munro.

Overhead, projectors stream a Longwood-inspired film sequence so the light bounces off the CDs and creates a constantly changing “skin of light” on the walls and those watching.

“I love the idea or the notion that water absorbs light and that you could plug water in and play it back and you get the history of the light that is coming back into the air,” he said. “I know it’s not true, but there’s this notion that water is really like a memory bank and if you could play that, it’s rather like standing in a time machine in a sense.”

A few feet away in the Music Room is  Time & Place, a series of artwork that reinterprets moments in time, inspired by Longwood and represented as abstractions.

Many of the plants near the exhibits work with them, and Munro says that’s not by accident.

“It’s what I call dancing together and all good exhibitions are,” he said. “You can’t impose your ideas on a place just by saying I want to do this or I’m gonna do that. You’ve got to sculpt it, and everybody collaborates in that sense.”

Munro said he does have dream projects.

Another is a meditation space taking shape in  New South Wales, Australia, where a modern open structure called Mettabhavana will allow visitors to walk in and see play of lights all around them.

“I have a great feeling that we need spaces,” Munro said. “You know, we’re a very stressed out society. We don’t have an awful lot to smile about, but we should do because you just have to open the door and window and walk out into the lovely landscape that we have.”

There are terrible things going on in the world, he said.

“And I think people need to take care of themselves but also take care of each other,” he said. “Maybe in a small way these installations — or interventions — can cradle people a little bit and give them some respite from the pressures of the day.”

It’s not hard for Munro to dismantle an installation, he said.

“Taking it down reveals the beauty of the place you’re in and it leaves the canvas free for other artists and people to to exhibit and create,” he said. “In a way, you’re just passing. That’s just what we do in life.

“I think the sadness for me is that time does pass very quickly. But the joy is to fill that time that you have with as much as possible.”