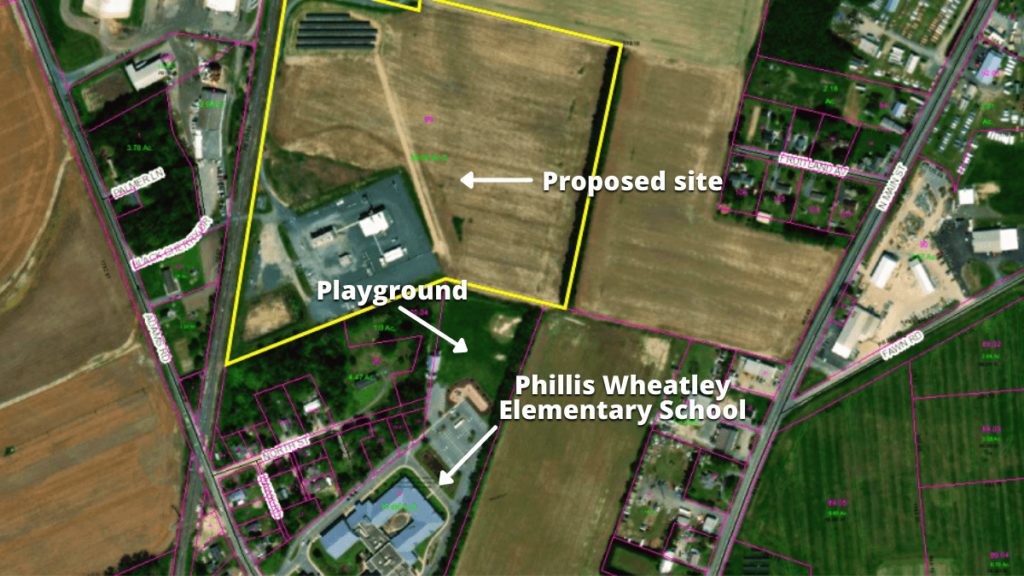 Sussex County’s Planning and Zoning Commission will decide Thursday night whether to allow a Bridgeville project to proceed that would put a natural gas offloading station within 1,300 feet of an elementary school.

The commission deferred action on Eastern Shore Natural Gas’ conditional use request during a Feb. 10 meeting after numerous members of the public objected to the proposal.

Opponents say the risk of explosions is a major concern, especially given the site’s proximity to Phillis Wheatley Elementary School, which has about 600 students.

They also have concerns about the environmental impact of the proposal, the potential for increased traffic and noise, and the fact that many residents in the surrounding area are minorities.

The Chesapeake Utilities subsidiary currently operates a compressor station on the property.

If approved, the company would construct above-ground terminals where trucks, which they refer to as a “virtual pipeline,” would offload gas from non-traditional sources. The gas would then end up in the regional pipeline.

Mark Parker, engineering manager at Eastern Shore Natural Gas, said during last month’s meeting that the station would not present a significant risk to people or property in the surrounding area.

“The gas is not treated or handled in any way here other than to offload it for direct injection into our pipeline system,” Parker said. “Instead of accepting gas through a pipeline, it accepts gas from a virtual pipeline – or a truck.”

Gas would not be released into the atmosphere, he said.

The proposal includes a six-foot-tall alarmed fence, a remote security system that would be monitored 24/7, and a closing security gate.

“We take very seriously safety at all times,” Parker concluded.

Greg Layton, an organizer with Food and Water Watch, said in an interview with Delaware/Town Square LIVE News that the proposal jeopardizes the safety of children at Phillis Wheatley and further entrenches the fossil fuel industry in Delaware.

As many as 18 gas trucks would be added to the road each day – a recipe for potential disaster, Layton said.

He refers to the trucks as “bomb trucks,” because they have a history of crashing and exploding.

“It doesn’t happen often but it did happen just last month in New York,” he said, referring to a Feb. 16 incident in which a tanker truck overturned and exploded in Long Island.

“The industry itself recognizes that they’re potentially dangerous,” Layton said.

Parker indicated during the Feb. 10 meeting that the company could come back to council later and ask to expand the site, which Layton said would result in even more explosive trucks driving through Bridgeville.

Eastern Shore Natural Gas has agreed to bring trucks in using a route that does not go past the elementary school.

The proposal also invited charges of environmental racism during the meeting.

That’s defined in the Dictionary of Environment and Conservation as “intentional or unintentional racial discrimination in environmental policy making, enforcement of regulations and laws, and targeting of communities for the disposal of toxic waste and siting of polluting industries.”

“There’s a history in the United States and in other countries of dangerous and dirty industrial operations being built near low-income people, people of color, and people who can’t fight back,” Layton said. “It doesn’t seem accidental that this proposed facility would be in a neighborhood of vulnerable people.”

Parker said that in the event of a catastrophic failure, any potential explosion would not leave the property.

He said a 10-inch pipeline under 800 pounds of pressure would have a blast radius of about 200 feet.

“They described this possible blast as a result of the pressure in the pipeline and did not get into what, exactly, would constitute the blast radius,” he said. “Does this mean that all shrapnel, gasses…would stay within 200 feet? What happens if the gas catches on fire? We don’t know, and we assert that the public should know all the risks of this project before our elected officials vote on it.”

Layton also believes that investing in natural gas pipelines only further entrenches the fossil fuel industry at a time when, he believes, we must be turning toward renewable energy.

“An overwhelming consensus of climate scientists predicts a climate catastrophe if humans don’t move away from using carbon-based fuels, and generating greenhouse gases in other ways, as quickly as possible,” he said.

Delaware, Layton noted, is the lowest-lying state in the nation, making it particularly vulnerable to the effects of climate change.

“Food & Water Watch believes that we must move away from carbon-based fuels and the infrastructure that supports them immediately, not invest more money in them,” he said. “We cannot be building more pipelines in 2022 and still expecting to meet the climate goals necessary to avoid the worst of the impending catastrophe.”

The Planning and Zoning Commission meeting will begin at 5 p.m. at the Sussex County Administrative Office Building. It will also be livestreamed here.