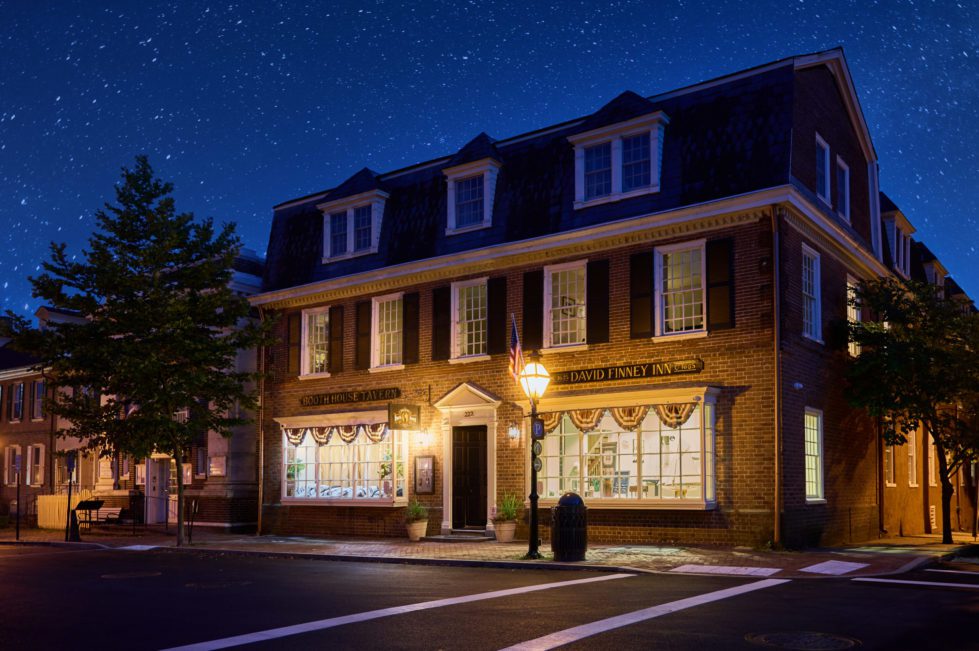 You can eat in the bar at Booth House Tavern in Historic New Castle.

Or the cafe. The Library. The Red Room. The New Castle Room. The Municipal Room. The Parkview Room. The Van Dyke Room. Or on the 3,200-square-foot patio.

“We wanted to take advantage of every nook and cranny,” said Mia deMarteleire, director of operations and hospitality.

“If we were somewhere else, we probably would have called it a brew pub, but because of where we’re located, using the word tavern made sense,” deMarteleire said.

The cuisine is American brew pub with a twist.

deMarteleire  said Booth House planners looked at other food offered in the area and didn’t want to go head-to-head with the Colonial-style fare offered at Jessup’s Tavern or the cajun food offered at Nora Lee’s.

“We felt a need to complement the area and do something different because we’re not trying to compete,” deMarteleire said. “We’re trying to be a partner in the community.”

The food includes lobster corn dogs ($14) and tempura fried fish bites with Thai chili sauce ($12) as appetizers; : rosemary mustard crusted lamb lollipops with a port
wine reduction sauce ($36) and salmon with a honey garlic glaze over creamy spinach risotto ($26) for entrees; and desserts such as a Guinness cheesecake with an oreo cookie crust and traditional apple crisp, which deMarteleire says Chef Sam Wall put on the menu at her special request.

Wall, who has worked at a variety of restaurants including Italian and Asian Fusion, really does have a bible of recipes, many his own, but others particular favorites. One example of a dish he created, but is not on the tavern menu, is a mac and cheese made with blue cheese, honey, butternut squash and mushrooms.

For Booth House and the planners decided to focus on quintessential American food like seafood and steaks and potatoes.

When pressed, Wall says he would steer a customer to the lobster corn dogs or the tavern’s jarcuteries ($16), which are jars of chef-chosen meats and cheeses that change every day for apps. For dinner, he suggests the lamb or salmon. For dessert, he said, people seem to like the cheesecake and bread pudding.

Wall is already working to add more item to the menu, including sandwiches.

Among the fans of the lobster corndog — which is a lobster tail fried in a cornbread batter and served on a stick — is Baltimore’s Rideshare Foodie Kreskin J. Torres, who recently made a swing through Delaware.

Cynthia and Mark Batty also are are fans you can find in the tavern at least twice a week. Two weeks ago, they had a joint birthday party for 60 guests on the patio. The Battys live nearby, eat out almost every night and were anxious for Booth House to open so they could add it into their repertoire.

“We thought, ‘Oh, please, let them be good,” Cynthia said. “We were wishing for them that they were successful and for a new place to go, and they have certainly met that that hope on our part.”

She is a wine drinker and particularly likes Booth House’s list of 20 wines for 20 bucks.

“I usually pick something off of that list and whatever we don’t manage to consume, we bring it home because we are four houses away,” she said.

The Booth House Tavern Bar was renovated slightly before opening, but most of its features remain.

Mark is a cocktail fan and likes their limoncello mojito.

Cynthia is a fan of the fish bites and both love the crab and vegetable soups.

“I think the only entre I’ve had was the filet mignon and it was excellent,” Cynthia said.

The Battys like the upgraded interior, and that diners can eat in more formal rooms away from the bar if they choose. Coffee drinks also can get away to a comfy lounge behind the DFI cafe, Mark  points out.

They look at Booth House as further proof that city efforts to bring in more tourism, including things like way-finding signage and street renovations, are paying off.

“It’s slowly coming into its own,” Cathy Batty said. “Historic New Castle’s been a project of a lot of different people over a very long time, but you can see all of the cumulative positive steps in the way the village looks, which has been fantastic.”

Booth House soon may have company among the new offerings in town. The Mercury Cafe & Teahouse will open afew  doors closer to the pier. In the other direction, Cafe New Castle is expected to have a new owner soon.

One of Booth House’s most remarked-upon features is Wall’s hydroponic farm, in a room off the main hallway that’s kept under lock and key.

In it, Wall grows herbs, lettuces, tomatoes and peppers to serve in specials. Other produce comes from Second Farms, also a hydroponic farm. The high-tech system talks to Wall via his smartphone, allowing him to boost nutrients and do other things in the garden’s four towers.

Wall has even named the four towers: Richard, Max, Bud and Roy.

The tavern’s bar area features different tones and textures of brown, including a newly refurbished bar with an expresso bumper to show off the wood and newly polished brass footrest, which the staff found in the basement.

“We wanted the bar area to stand on its own with a historic and industrial feel,” deMarteleire said. “I didn’t want people to walk in and think, ‘Oh, it’s historic. It should be dark and gloomy. We wanted to give it some texture, but coziness.”

Tall pub tables with an industrial feel line one wall, and people do eat there. The tavern offers happy hour six days a week from 3 p.m. to 6 p.m. with $1 off draft beers, $1 off house wines.

Most dining patrons are seated in one of the six dining rooms.

The Booth House staff enlisted gallery owner Rodney Pratt to help them give a different feeling to each of the dining areas.

The Red Room was left the same color, but jazzed up with art by textile artist Hannibal Lee.

“He work really gives huge energy to that room, and people just love going in there when it’s their birthday or anniversary,” deMarteleire said. “It feels like a celebration.”

The nearby New Castle Room is one of the smaller dining rooms, with green walls that deMarteleire considers calming. She thinks it’s a great room for a first date. It features artwork of Old New Castle historic buildings, including the David Finney Inn.

The library on the second floor has paneled walls and shelves filled with books that were left in the room. It can accommodate 40 ideally, but could be pushed to 50. A little porch off it allows guests to go outside for coffee.

The Municipal Room down the hall offers a view of the New Castle Courthouse. It’s more of a formal setting for a small group, designed for meetings of six to eight. The art there is mixed, with pieces showing food, pottery and classical images.

Booth House Tavern’s Chef Sam Wall has his own hydroponic farm for herbs and greens.

The Municipal dining room at the Booth House Tavern. Photo by Joe Hoddinott/Photography

The patio at the Booth House Tavern at the David Finney Inn in Historic New Castle. photo by Joe Hoddinott/Photography

DFI Cafe at the David Finney Inn. By Joe Hoddinott/Photography

The Parkview Room will seat 12 to 15 and offers modern art with big bold canvas prints.

The Van Dyke Room features the art of New Castle resident Stephen Franklin, who does a take on Bahamian and African American art, as well as still photography. His wife, Leah, has been helping to train the cafe workers.

The upstairs also features bump outs created from old law firm secretary stations so that cocktails can be served from there.

One reason for the many dining rooms is that planning was taking place during COVID-19 restrictions.

“We didn’t know what was going to happen when we opened our doors,” deMarteleire said. Planners wanted to be able both serve diners safely, but also guarantee workers the best income they could. As luck would have it, indoor dining restrictions were lifted just as the restaurant was opening.

The biggest surprise before opening was the kitchen, deMarteleire said. Owner Rich Marcozzi took over in November, and the team expected a turn-key deal.

They ended up buying all new dinnerware, because there was plenty, but it didn’t match. They also had to repair a Blodgett convection oven, replace the grease trap, oven hood and two coolers in the kitchen and the beer cooler in the basement.

But now, deMarteleire said with a  laugh, “My grease trap is sooooo sexy.”

The Hammergod brewing tanks will be installed in a new glassed-in area off the patio.

Already, brewmaster W. Ryan Athnes has been at work in the kitchen, creating a Colonial Red that sold out in two days and was replaced by The Imposter, a brown ale now on tap.

Athnes had been a structural engineer working for Dupont and Sunoco and felt worn down by what he says was constant witch-hunting for blame. He had volunteered for Twin Lakes and Fordham & Dominion Brewing while brewing himself at home. When Marcozzi talked to him about starting a brewery, Athnes jumped in.

They’ve bought a one-barrel brewing system from Vermont that’s sitting in the inn basement waiting to be installed.

“We’re going to be offering everything, but honestly the biggest thing is that we’re not hop heavy,” Athnes said. “I think hops are overdone. I think of hops as a seasoning.”

Athnes says he’d like to try some hard seltzers, too.

The Airbnb was in operation before Marcozzi took over. Most of its customers had come from Flight Safety in New Castle, deMarteleire said.

“More locals are staying there now,” she said.