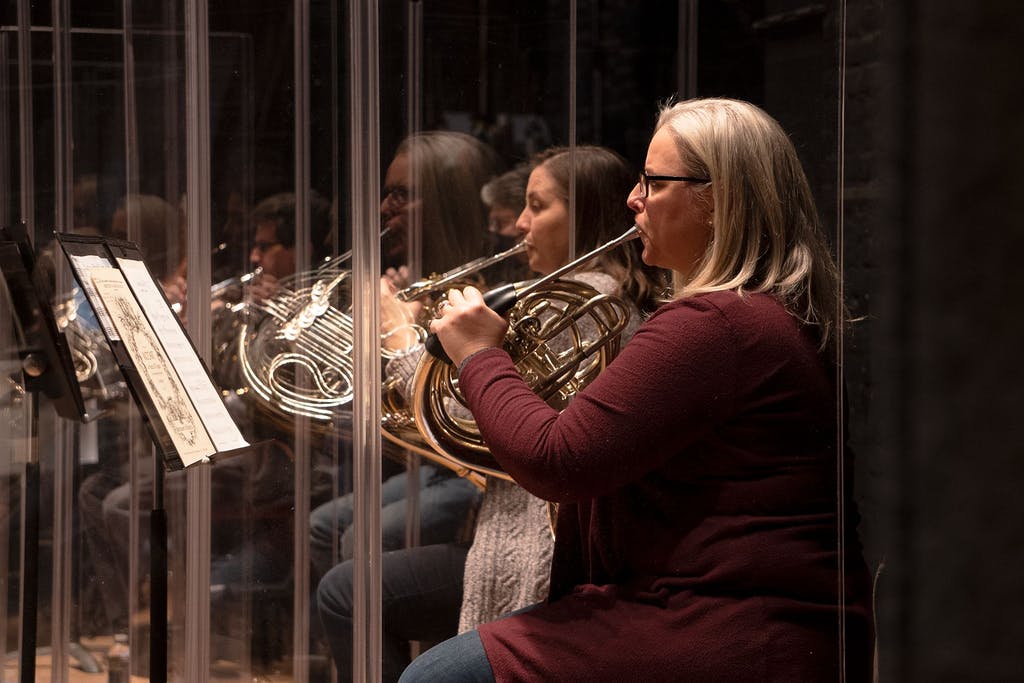 DSO principal horn player Karen Schubert has learned to adjust her timing behind her plexiglass shield. Photo by Martin Martinez.

The Delaware Symphony Orchestra is back on stage, COVID style.

Thirty-four musicians are spread out across The Grand’s main stage rehearsing for the second classical concert. Wind and brass players are encased on three sides in plexiglass shields. Everyone else is wearing masks.

And every single cushioned red seat in the Copeland Auditorium is empty.

No matter. The musicians are delighted as they rehearse the program, which includes the last pieces written by Wolfgang Amadeus Mozart and Joseph Haydn.

“I’m so thrilled that our orchestra is doing this,” said principal horn player Karen Schubert. “It’s just such a treat to be back doing what we love. And it’s just something that I don’t think any one of us has taken for granted at this point.”

This was the first symphony concert she’s played in since early 2020, before coronavirus slammed shut the doors of performing arts venues and left artists jobless.

The symphony’s second of six classical performances was recorded Friday and landed in subscriber email inboxes Tuesday, good for 30 days of viewing.

Maestro David Amado said he finds being back onstage with the musicians comfortable in its familiarity and uncomfortable because of worries about safety.

“Playing concerts like this really occupies two extreme ends of this sort of comfort spectrum,” he said. “On one hand, I feel like all of us on the stage slip so easily and quickly and comfortably back into the groove of making music. We’ve done it together for a very long time. And there’s a certain level of just comfort, being together on stage.

“At the same time, there’s another extreme. These impediments that we’ve never had to think about before and never experienced before that are standing in our way of doing things the way we’ve done it in the past. So there’s a level of newness and, I’d say, a level of discomfort.” 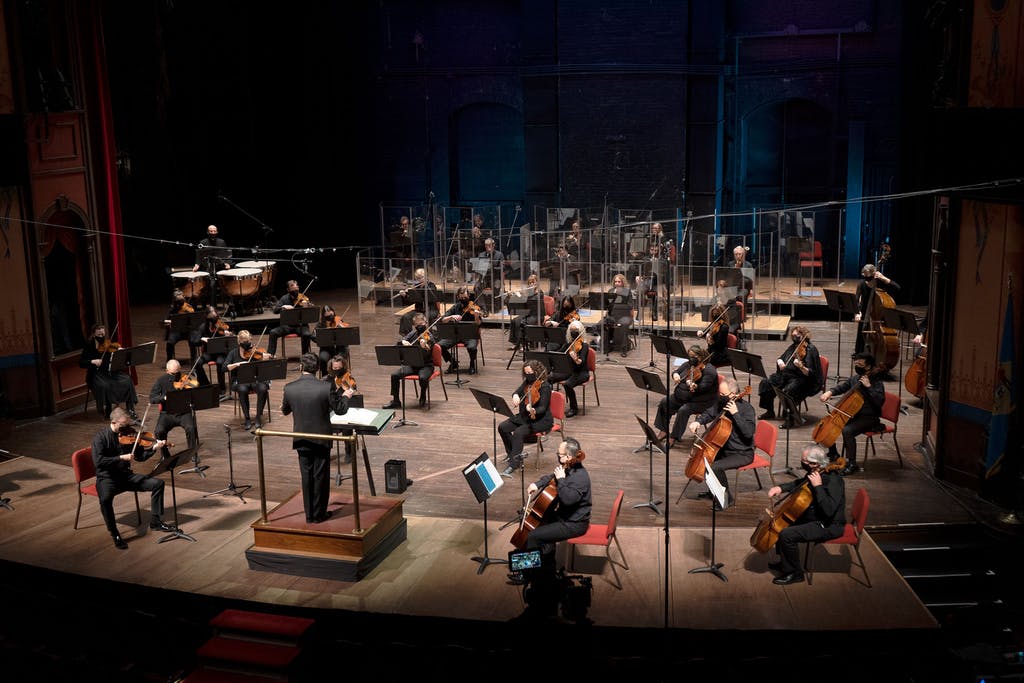 DSO held some small in-person chamber concerts in the fall at the DuPont Country Club, but faced with no way to safely put fans in seats this winter, the organization decided to record six classical concerts to distribute online.  Not only did that keep the symphony in the public eye, it also gave musicians jobs and satisfied fan demand.

“How amazing that we get to to do this at all,” Amado said. “It represents such a huge effort on everyone’s part, from the musicians to the administration to the board, to rally around this way of doing things. And to pull it off. It’s really very extraordinary.”

Each of the 2021 winter-spring concerts will use 30 to 40 musicians, about half the 75 normally on stage. Assignments were spread out across the concerts so that it was equitable, said J.C. Barker, executive director.

Schubert, who joined the symphony in 1997 and has been principal horn since 2003, said none of the other groups she works with have had any live performances.

She’s passed the time by practicing her French horn and teaching lessons through Zoom, but it’s impossible to play together over Zoom because of a slight time lag, she said.

“I have an app that allows me to multitrack and play quartets with myself, so I was having fun exploring that but that only goes so far because it’s the interaction with other people that you want,” she said.

Back on stage, though, she found herself in an unfamiliar place: On the right end of the last row, rather than in the middle of the group.

She quickly discovered that sound and sight cues were different. Because she’s playing behind a sheet of plexiglass that slows her sound, she had to adjust her timing.

“We have to do a little bit more anticipating than we normally do,” she said. “Because of that distance in order for it to all sound together, we have to play a little big ahead of what we hear. In a sense, we’re playing more with what we’re seeing that what we’re hearing. It’s challenging because it doesn’t feel quite right.”

Amado said horn players often have to play slightly ahead of music.

“Karen is such an extraordinary musician,” Amado said. “Have you ever thought about the way the bell of the horn is shaped? It’s already pointing backwards. So even when Karen doesn’t have those barriers in front of them, the sound has to leave their horn, go to the back wall and then bounce back out and be perceived in time with everything else.

“Now you’re adding this extra barrier, which delays the sound of their hearing to react. What she’s done is figured out where that pocket is that she can play. That to me is a miracle.”

Amado, who has been with DSO since 2003, said programming the concerts was different than it would be for a normal series.

An orchestra is a variable thing, Amado said. With musicians spread out, he couldn’t pick pieces with huge wind or brass contingents. “So we chose carefully, but I don’t feel like we were really limited because there’s so much great repertoire.”

For the concert out this week, he chose the overture from Mozart’s “The Marriage of Figaro” and Symphony No. 41 “Jupiter,” as well as Haydn’s Symphony No. 104 “London.”  Mozart’s “Jupiter” and Hadyn’s “London” were the last symphonies they wrote.

Amado said he can’t wait to have an orchestra on stage without plexiglass shields and to have an audience in the hall.

“It’s hard to play concerts without an audience,” he said. “You know, we finished these pieces and everyone just looked at each other. It’s just weird.”

There’s no applause and no reaction during the recording.