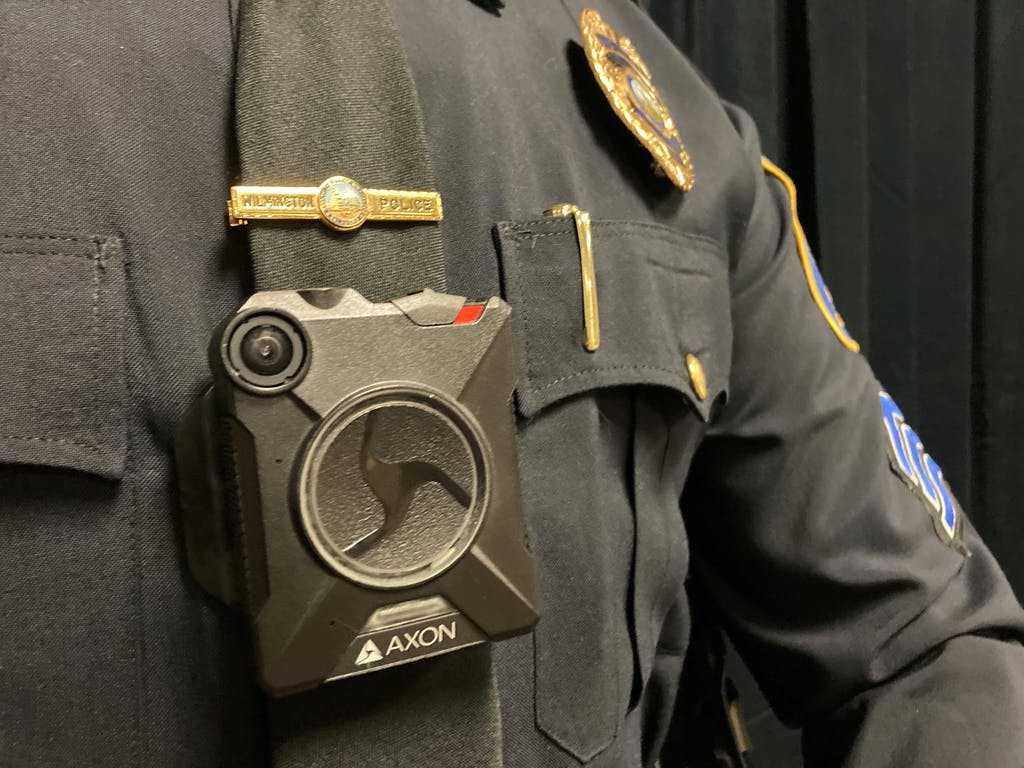 Wilmington’s police officers are expected to all be using body-worn cameras like this one by early June.

As Wilmington prepares to launch its police body camera program in full by early June, a Democratic representative has filed a bill that would require law enforcement officers and a few others to wear cameras, too.

Wilmington Mayor Mike Purzycki and Police Chief Robert Tracy this week said groups of officers will begin training for the camera program the week of May 9 and then begin their next assigned shift wearing one. In a press release, they described it as continued progress toward accountability and transparency in city policing and community engagement.

Rep. Sherry Dorsey Walker, D-Wilmington South, on Thursday filed a bill to implement a statewide body-worn camera mandate and police for the use of those devices. Her House Bill 195  also would require Department of Correction and Department of Services for Children, Youth & Their Families officer to wear them as well as police. It would require the Council on Police Training to create body camera regulation and standards for all Delaware law enforcement.

Dorsey Walker said it was evident that police want body cameras as much as the public does, and her legislation is an collaboration between the community, police, Department of Justice and lawmakers that will allow the bill to fulfill one of the planks in the platform of the Delaware Legislative Black Caucus’ Justice for All Agenda.

“Body-worn cameras have the ability to be a game-changer in police-community relations,” she said in a press release. “They greatly improve transparency and accountability while providing increased protection for both the police and the community.”

“A statewide body-worn camera program and video evidence repository will make an immediate impact on enhancing accountability, increasing transparency and building community trust,” Ogden said. “In addition, they are an invaluable evidentiary tool in prosecuting criminal cases, as well as resolving internal affairs investigations and improving police performance, when utilized for supervisory review and training purposes. Every police chief in our state is committed to developing a uniform policy that is consistent with national standards and the best practices in our profession.”

HB195 tells the Council on Police Training to create regulations and standards for body cameras and give them to Attorney General Kathleen Jennings by Jan. 15, 2022. To do that, the bill adds heads of the House and Senate Public Safety Committees and two members of the public – appointed by the governor and not law enforcement officers or affiliated with law enforcement – to the council.  The bill also would require the council to hold at least two public meetings to solicit public input into the development of the regulations.”

While many police agencies would like to have body cameras, they have said in the past that the matter is more complex than just hooking a camera on an officer’s chest. The cameras will require rules about what is filmed, how long that data is kept and where it is kept and stored. If each jurisdiction has different rules, that could create troubles among jurisdiction or in going to court. Beyond buying the cameras, having more data will require more equipment and could require more people to handle it, police departments have said.

“This is smart policy,” Jennings said. “It’s time to get it done.”

Under HB 195, state agencies would be required to implement the statewide body-worn camera program after the procurement of cameras, development of a central data storage program, and hiring necessary personnel are completed, as funding is available. Gov. John Carney’s proposed fiscal 2022 budget includes $3.6 million for development and deployment of body cameras: $1.6 million for additional police body cameras and an additional $2 million for data storage and personnel costs.

But there is no statewide mandatory policy governing the use of the cameras and the video they take.

According to the National Conference of State Legislatures, only seven states currently mandate the statewide use of body-worn cameras by law enforcement officers. Six of those states have enacted those policies since May 2020.

HB 195 has been assigned to the House Public Safety & Homeland Security Committee, which will hold a hearing on the bill at 1 p.m. on Wednesday, May 12.

In Wilmington, every member of the department will be assigned a body camera, command staff, officers in specialized units and those assigned to administrative functions.

The city already has a camera camera policy,  shaped by national best practices.