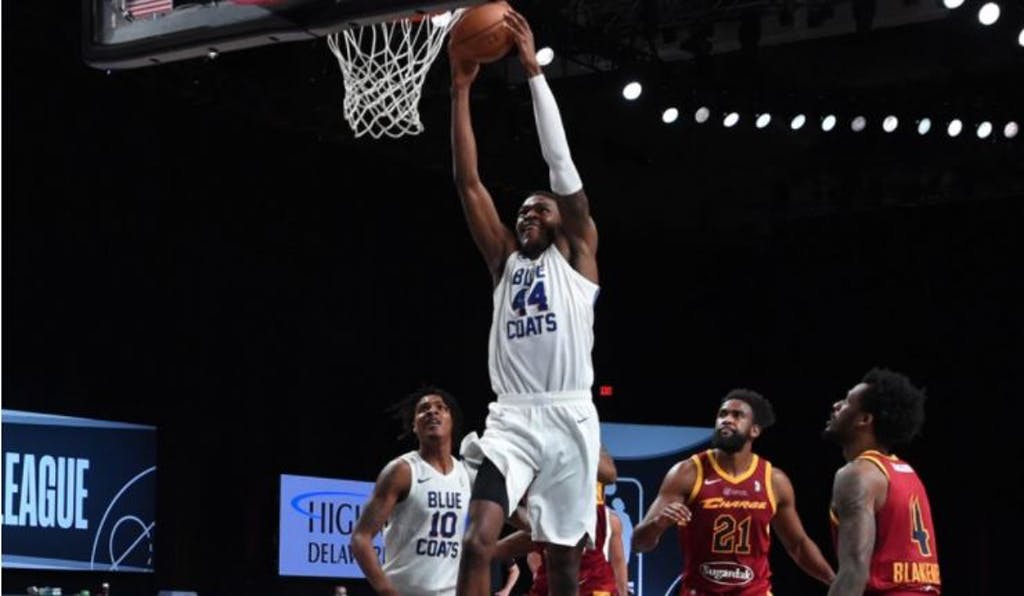 Paul Reed goes up for a score in the game that put the Blue Coats into the playoffs.

The Delaware Blue Coats beat the Canton Charge Wednesday 103-97 at the Disney Bubble to grab their first playoff berth.
The team, an NBA G League affiliate of the Philadelphia 76ers, overcame a 16-point deficit in the game. They have been playing their season in Orlando.
The Blue Coats won the rebounding battle, 52-49, and scored 20 more points in the paint (54-34). Delaware swiped at least 10 steals (11) for the ninth time in 13 games.
76ers two-way contract player Paul Reed scored 14 of his 26 points in the fourth quarter, the most for any Blue Coat in a single quarter this season. He added 12 rebounds, including a season-high nine boards on the offensive glass. It was Reed’s 10th double-double in 13 games.
Error, group does not exist! Check your syntax! (ID: 11)
Delaware’s Justin Robinson tallied 17 points,  seven rebounds and a game-high eight assists in a game-high 35 minutes of action. Michael Frazier II scored 18 points  off the bench, while Jemerrio Jones posted a game-high plus-24 rating with five points, eight rebounds and four assists.
The NBA G League playoffs begin March 8.
The Blue Coats will play two more games this week to complete their 15-game season. They take on the Salt Lake City Stars Friday at 7 p.m. and  can be seen on DETV Channel 28 and heard on Rowan Radio 89.7 WGLS-FM.