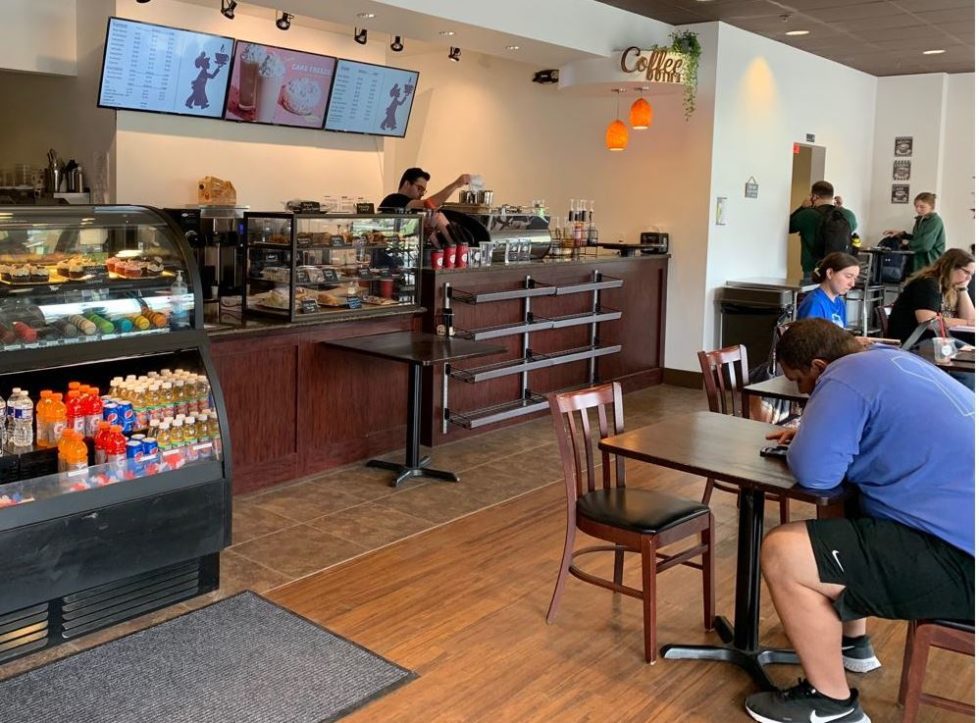 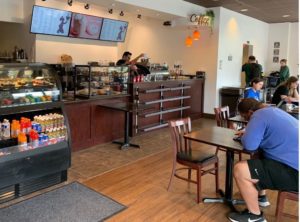 With University of Delaware students largely gone for the summer, Bing’s Bake & Brew in Newark is focusing on wooing local residents with its coffee-based drinks and fresh pastries.

Some of its popular monthly specials are perfectly chilled for summer’s heat.

Guests can pair their drinks with a bagel, croissant, muffin, Danish — or just dive straight into the new Lemon Raspberry Strip, a confection made right down the road at Bing’s Bakery out of layers of lemon and raspberry mousse on top of sponge cake.

The idea of pairing Bing’s baked goods with coffee seemed natural to the family running the bakery.

“I’m just a coffee fan personally,” said manager Vinny Guzzi. “It just kind of gets me going in the morning and it’s just a part of my routine. I also think it’s a community thing that helps bring people together, just the start-up coffee.”

The son of Bing’s owners Carla and Tom Guzzi, Vinny had been a baker there when he developed an allergy to raw flour, which is hard to avoid in a bakery. He worked out front before moving to manage the coffee shop. 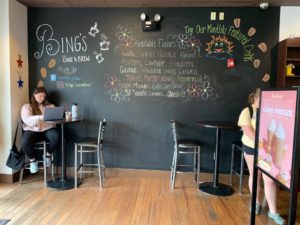 Bing’s Bake & Brew already is casting about for a second location.

One of the coffee shop’s selling points, the Guzzis say, is that Bings Bake & Brew uses a coffee you can’t get anywhere else in Delaware. They spent a lot of time researching which beans they wanted to use.

Two brands were neck to neck when they settled on CrimsonCup out of Ohio.

Its blend of beans is espresso-based and designed to be used for cold brew and for frozen drinks, Vinny said.

The beans are on sale in the shop, too.

Coffee and pastries seemed like a natural pairing when the Guzzis, who have owned the bakery for 17 years, began contemplating the idea for a coffee cafe.

Bing’s Bakery goods already are sold at area ShopRite stores, and the coffee shop could help extend their brand, while offering customers a new experience.

The Guzzis found what they thought was the perfect location: A space already fitted out with a kitchen by former occupant Saxby’s at 57 S. Main St,, on the backside of the Claymont Steak Shop. It had been empty for years.

“Someone came to me with this opportunity. I wasn’t looking for it,” said Carla Guzzi. “I was like, alright, I’ll entertain it.”

When Tom returned with her to view the property, they realized it already was perfectly outfitted for a cafe, which would save them thousands in build-out costs.

“OK, this is a no brainer,” she thought. 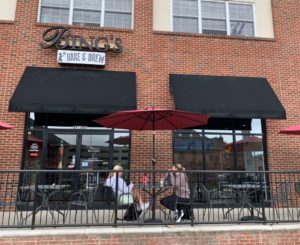 Bing’s Bake & Brew is just around the corner from the Claymont Steak Shop in Newark.

Bing’s Bake & Brew opened in December 2019. It was just finding its footing when it had to shut down because of the COVID-19 pandemic lockdown.

It reopened in the middle of May, but students weren’t on campus and so few people were out in public that customers could be scarce.

Since then, it’s built a loyal following among UD students, particularly those from the School of Music, which is right across the street.

On a recent May day, students toting instruments, studying books, typing away on their laptops and even practicing for a conducting test — with music playing over their earbuds — packed the inside and outdoor tables at lunchtime.

Many Bing’s Bake & Brew customers come from the apartments and nearby neighbors.

There’s plenty of easy parking nearby and lots of good light through the floor-to-ceiling windows on the shop’s front and side.

The cafe’s espresso drinks are its best sellers. The largest in that group get three shots of espresso, Vinny said, but some customers ask for more.

Pastries are designed to complement those. Muffins and bagels are the current best-sellers for breakfast, Vinny said. 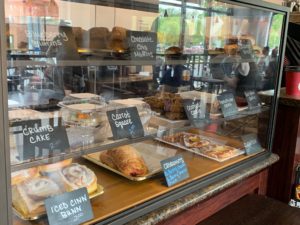 Most of the baked goods at Bing’s Bake & Brew are meant to complement coffees and a quick stop.

Vinny hopes to expand the breakfast food menu, but only with fresh and not frozen items, and then maybe add a few simple lunch choices.

“I could easily serve a frozen egg to students,” he said. “But I don’t want to serve that. I want to serve something that’s higher quality.”

The Guzzis are not interested in turning the cafe into a meal-focused enterprise. Nor do they want people to think it’s just an extension of the bakery.

“What we think about when we think about a coffee shop,” Carla said, “is that food should be a very small component of it. We don’t want to hit that lunch menu too hard, but perhaps have ready-to-go salads and chicken-salad sandwiches, just a couple of things.”

There are, however, few places in the  Bing’s Bake & Brew’s immediate location to grab a quick breakfast.

“So we’ve got croissants now and we hope to get a little bit of breakfast in, maybe some oatmeal in the winter,” Carla said. “But with coffee, you don’t want a full-fledged cafe. You want a coffee cafe.” 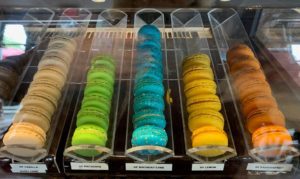 The selection of macarons at Bing’s Bake & Brew include passionfruit, birthday cake, lemon and pistachio.

The family was thrilled to be able to open its first coffee shop in the town of Newark, which has supported the bakery for more than 75 years.

They are ready to expand the coffee shop to another location.

“But I’m very selective and careful about where that might be,” she said.

In the meantime, she can lean back at her high top in the cafe and look around with gratification.

“We’re really proud of this coffee shop,” she said. “We started with major obstacles and we persevered. We just kept on going.

“Sadly, a lot of businesses didn’t make it through the pandemic. We’re fortunate. We’re very fortunate.”