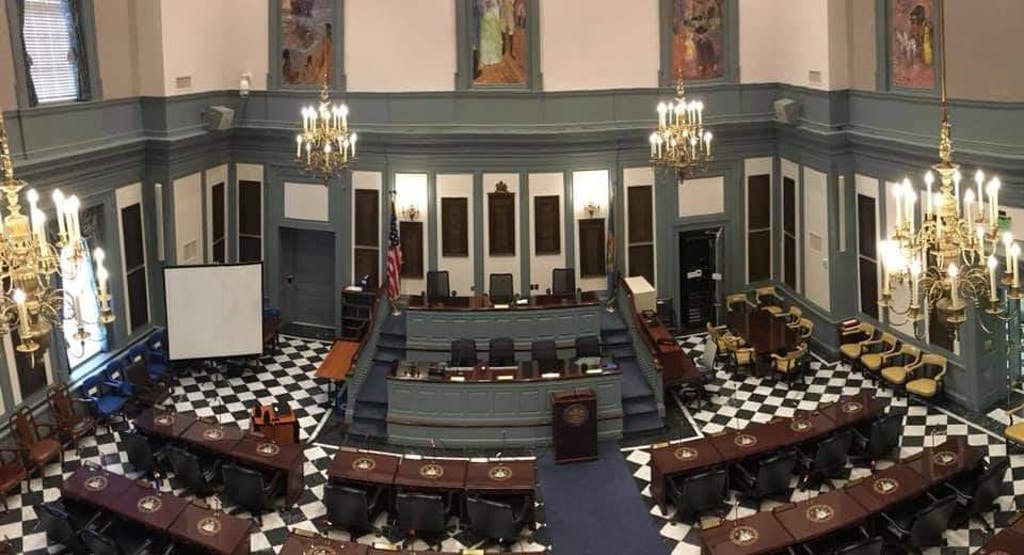 Senate lawmakers this week rejected a bill that sought to strip the state’s authority to force vaccinations, mandatory quarantine and self isolation on residents against their will.

The legislation, Senate Bill 58, was struck down by Democrats following a lengthy, and at times contentious, debate in the Senate Executive Committee Tuesday.

Sen. Dave Lawson. R-Marydel, introduced the bill that would have removed the state’s authority to forcibly isolate, quarantine, vaccinate or treat individuals against their will for COVID-19 during a state of emergency.

“The genesis of the bill is public concern with forced vaccinations and the government forcing folks to do things against their will,” Lawson said as he opened the discussion on the bill at the hearing. “The concern was, one, the individuals being forced to do that, but then whenever the conversation came about with child vaccines that was really a concern. This limits the state’s ability to force that.”

Some Delawareans remain wary of the vaccines and refuse to be inoculated, citing a lack of research during the clinical trails and potential long-term adverse side effects.

“I don’t think that this is something we should ever force somebody to take.” stated Clint Brothers, a Kent County resident who strongly supported the bill.

“Vaccinations, as with all other medical interventions, should be voluntary,” explained Amy LePore, a New Castle County resident who supports medical freedom. “No Delawarean should have to bear the image that accompanies the current codes of requirements that a loved one might one day be forcibly vaccinated or quarantined for what is tantamount to a flu.”

“If the state can forcibly inject a substance into your body then you have no ownership over your life, your body. You have no real rights,” stated Sam Chick, a Dover-area resident who feels the state’s ability to force such a measure would be unconstitutional. “It’s a base violation of your natural inalienable rights.”

The Delaware Division of Public Health vehemently condemned the legislation.

DPH Director Dr. Karyl Rattay spoke at length during the hearing, imploring the Senators who comprise the committee to reject the bill which she described as “disturbing.”

“The fact that this bill is being proposed to remove the state’s authority to use every tool at its disposal to protect the public’s health if needed, specifically the one virus that has created the biggest public health crisis’ of our lifetime, is quite frankly disturbing,” Rattay said. “Although the state has the power to quarantine or isolate, based on the list of notifiable diseases, we have always considered this a power of last resort.”

This led to a back-and-forth exchange between Rattay and Lawson, who questioned the state’s COVID-19 fatality data and defended his legislation.

“What about the healthy?” Lawson said. “Are we overreaching here? Are we going after a vaccine that is experimental at best? It’s not approved by the FDA, only for use during this emergency, and folks are very concerned about that.”

“I thought Dr. Rattay was very compelling,” Sokola said. “This bill is strictly about COVID-19 which isn’t over yet and it prohibits the quarantining, vaccinating and isolating from this specific circumstance. One thing we’ve learned over time is that variants occur and there may come a time when we need the tools in the box for this bill.”State public health officials said the measure is constitutional and cited a U.S. Supreme Court case cited by Rattay.

In 1905, the U.S. Supreme Court upheld the authority of states to enforce compulsory vaccination laws in Jacobson v. Massachusetts. The Court ruled that individual liberty is not absolute. The case is considered a landmark public health decision.

The Supreme Court ruling did not, however, strike down the Massachusetts Supreme Judicial Court’s finding that the state did not have the power to vaccinate by force people who “deem it important that vaccination should not be performed in his case,” according to the Cato Institute.
The Massachusetts Court had said that Henning Jacobson did not have to take the vaccine, but could pay $5 instead. He had refused to take the vaccine because he and his son previously had bad reactions to vaccines. He also refused to pay the $5, but eventually chose to pay the fine instead of taking the shot.
Error, group does not exist! Check your syntax! (ID: 11)
Delaware’s code says that the state may not forcibly administer vaccines if they pose a serious risk to the individual in question’s health. The law also states that the government must provide evidence that the person poses a serious risk to public health before they can force a vaccine or quarantine.

State law also provides full due process on the issue, along with legal protections if it ever came to a point where they had to issue a vaccine mandate. Those who refuse to be inoculated under law would have the right to a hearing within 72 hours and, depending on the circumstances of the individual, the right to take it to court.The most recent case where the state had to force such a measure involved an isolated tuberculosis outbreak where two individuals refused to comply with treatment and were forcibly vaccinated.

The bill did not pass out of committee, with only Lawson and Sen. Brian Pettyjohn, R-Georgetown, voting for it. That means it’s dead and will not be considered by the full Senate.
The committee Democrats backed Rattay, Lawson said after the meeting.
Error, group does not exist! Check your syntax! (ID: 11)
“That speaks clearly as to their lack of concern for the public,” Lawson said. “It’s time we the people stand up and take our state back. This is absurd! There’s no reason for this, it doesn’t hurt them. It doesn’t keep them from doing anything. It keeps the people safe in their own decisions. There’s very few, very few, that came out against this bill, except Dr. Rattay who bows at the feet of Dr. Fauci and is leading our governor around by the nose.”
Pettyjohn, a co-sponsor of the bill, echoed the concerns of his constituents who feel it should be their choice to be vaccinated.
“There are a lot of people that are saying, ‘If I want to get the vaccine then it should be my choice. The state should not be telling me that I have to get the vaccine,’’” Pettyjohn said. “The same thing with an isolation or quarantine. If they choose to quarantine or isolate, they want that to be their choice and not something that the government tells them to do.”
Lawson vowed to continue to the fight.
“We allow them to control us, the people. We have control and we have to take it and we have to make sure they understand it is our control. That is the people’s building,” Lawson said, pointing at Legislative Hall. “Laws come from this building, and this building only, not from the Governor, not from court and not from regulation.
“They may be seen as laws, but they are false, they are pretend legislation, they are not legislation. Anything that runs contrary to the constitution is invalid, and we are notorious for being invalid.”