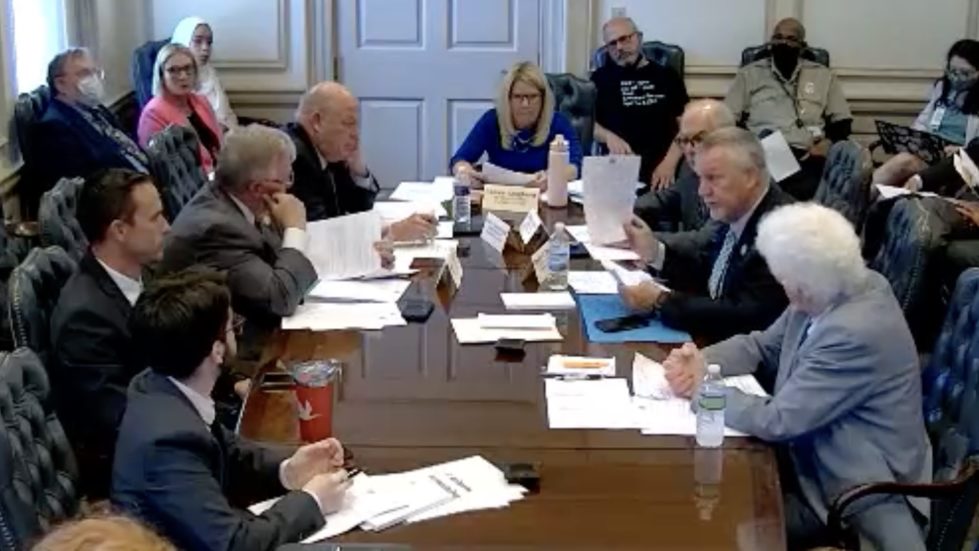 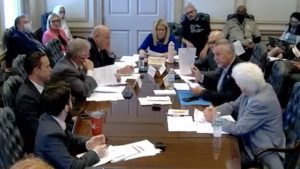 Rep. Tim Dukes, R- Laurel/Delmar, holds a bill during a discussion about creating an inspector general in the House Administration Committee Wednesday

A bill to establish an “independent and nonpartisan” inspector general’s office moved forward Wednesday in a Delaware House committee.

The House Administration Committee also moved along a bill to encourage filming in the state by offering tax credits.

Another bill, on Wilmington’s ability to acquire vacant or abandoned property through eminent domain, was postponed entirely to Thursday.

Rep. John Kowalko, a Democrat from Newark who sponsored HB405, said 36 states have an inspector’s general office, and these offices save taxpayer money involving “waste, fraud, abuse, mismanagement, corruption or other conduct that is harmful to the public interest.”

Members of the committee went back and forth on how the bill would affect oversight already handled by the state auditor and attorney general.

Rep. Michael F. Smith, a Republican from Newark who had been offering a similar bill, said that the new office would be at the top of the “funnel” in handling issues. It might help out in conflicts among agencies, he said, alluding to accusations around Auditor Kathy McGuiness.

The state auditor and attorney general will be helped by this, Smith added, promising to clarify in the bill how the office is organized. After the committee and the public finished their comments, Kowalko promised to address these interdisciplinary issues.

Multiple representatives of the Delaware Coalition for Open Government argued that some recent issues ins the news – including false claims and inadequate record-keeping by Connections Community Support Programs – would have been alleviated by the new office, because other state agencies were slow to act. Nick Wasileski of the coalition read into the record a list of 16 groups that supported the bill, including the local League of Women Voters and the American Civil Liberties Union.

Claire Snyder-Hall of Common Cause argued that the state cannot afford to not support the office.

The attorney general “had no objections” about the office and thought it would be “beneficial,” said John Kowalko III, the sponsor’s son and another member of the coalition, who said he was involved in drafting the bill.

“The spirt of the bill is about public trust,” Smith said.

The committee also moved along a bill to provide a 30% transferable tax credit for investments in the state in film, television, esports or videogame productions. ““You have to take chances,” said Rep. Valerie Longhurst, sponsor of HB465, and chair of the committee. “I think that this is a great opportunity.”

During the public comments, three people in the entertainment business praised the bill and cited how it would make the state competitive (and, unsaid, their business more profitable). However, Rick Geisenberger, secretary of finance, said there has been an “extensive and very mixed” economic analysis of such credits or incentives for taxpayers.

Introducing herself as the legislature’s youngest member, Rep. Madinah Wilson-Anton, a Democrat representing Newark, opened up discussion of her bill that would eventually amend the Delaware Constitution “to conserve, protect and maintain Delaware’s natural resources.”

She said she’s not concerned “about a specific problem” with HB220 but a “mission” to maintain a clean and healthy environment. But she then cited specific problems, including Delawareans who have to rely upon bottled water to drink and how Delaware has the nation’s highest percentage (97%) of impaired rivers in the country.

HB220 describes itself as “the first leg” in an amendment process – and what could be a lengthy process, Longhurst warned. “I had to take a loss before I got a win,” she said, recalling the years she fought for equal rights.

Shawn M. Garvin, secretary of the Delaware Department of Natural Resources and Environmental Control, said the intent is “consistent” with DNREC’s mission, but its overreaching breadth means he cannot support it as written. “I have significant concerns,” he said.

Some of the committee discussion centered on lawsuits, such as who could sue whom and the chance of “frivolous” suits. How current regulations maintain access to clean water was also a topic.

An outside expert brought in by Wilson-Anton defended the need to develop a constitutional authority because existing laws aren’t working.

Public comments included opposition by the Delaware Farm Bureau and the New Castle County Chamber of Commerce and support by individuals concerned about their health and the health (and death) of others.