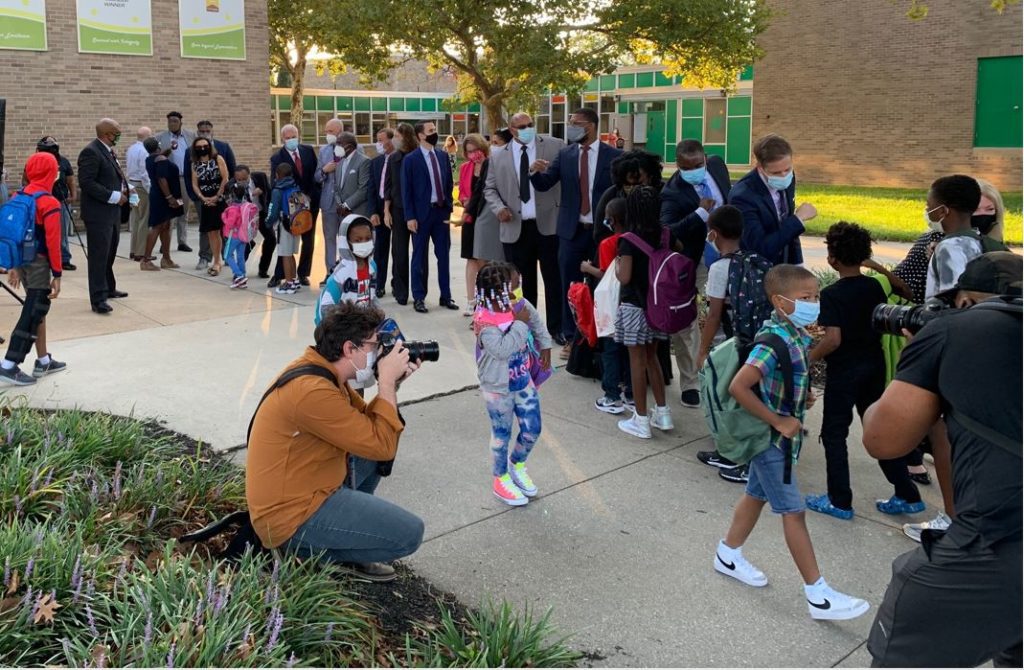 Wilmington leaders gather at EastSide Charter at the start of each school year to welcome the students back to school.

Two Black Wilmington leaders stand on opposite sides of the debate over whether Delaware Charter Schools should be able to give admission preference to students who live nearby.

Logan Herring, CEO of The WRK Group, an organization that focuses on community potential and eliminating the barriers of structural racism in Riverside, supports the 5-mile radius preference.

Herring said does not want children bussed into the community just to take advantage of the community’s charter school, then leave once they reap the benefits while the people paying taxes for the school will not all have that opportunity.

“We want schools in Riverside to attract their own neighborhood,” Herring said during Wednesday’s hearing. “We don’t want to see people coming in from the outside and taking advantage of all the good that’s going on in the neighborhood or displacing students that the school is designed for.”

Herring said after the meeting that one reason he wants Riverside children to benefit from the charter schools is that they are the ones who historically have been left out of socioeconomic opportunities, including access to quality education.

Rep. Nnamdi Chukwuocha, D-Wilmington, said during the hearing Wednesday that charters who include living nearby as one of their admissions tests are operating with racist implications.

“The 5-mile radius preference is used to continue discrimination,” he said.

Repeated efforts were unsuccessful to contact him for additional comments or examples.

Herring’s and Chukwuocha’s comments came during a debate about House Bill 238 in the House Education Committee. That bill would bar charters from giving preference in student admissions to students residing within a 5-mile radius of the school.

EastSide, First State Montessori Academy and Newark Charter are the only three charters in the state that use the 5-mile radius preference during admissions.

The charter schools can double-down on their exclusivity and deny children and parents a right to their choice of a selected education, he said.

“These are public schools and they are, by law, supposed to offer equal access,” Kowalko said after the meeting, “especially for those who pay the taxes for these local schools.”

Charter schools generally require students to formally apply and sometimes take admission tests. The applicants are then admitted based on test scores and grades, among other things.

It’s a different system than schools use when deciding which school-choice applicants to accept. That’s often just done on a simple lottery basis.

Kowalko supports charters and appreciates their success, but he cites that success as all the more the reason to allow all Delaware students to have an equal opportunity to attend.

The idea of removing a stipulation that nearby residents are given preference has been struck down before.

In July 2017, Gov. John Carney vetoed a bill that would have removed the preference.

He said then that he felt the bill would unfairly exclude some of Delaware’s most vulnerable students.

“The legislation limits options for at-risk students in the Christina School District portion of the City of Wilmington – many of the kids who need our help the most – and that is something I cannot support,” Carney said at the time.

He’s since gone on to champion the Wilmington Learning Collaborative, which may create a new board that oversees just city children in the Brandywine, Red Clay and Christina school districts.

Kowalko chose to revisit the 5-mile radius preference because he believes it violates the principles a public school system is supposed to uphold: providing access that allows every student to flourish.

Herring pointed to a study from the University of Delaware which said 70% of children in the Riverside neighborhood live in poverty; the highest of any neighborhood in Wilmington.

The study also found that they have “very few high-quality early education providers.”

Because of that, Herring believes Wilmington charters should favor those within a 5-mile radius.

“The community of Riverside pays taxes for Wilmington’s charters to succeed,” he said, “and giving the direct community a chance to succeed gives students a fair shot at life.”

Kowalko’s bill was voted out of the House Education Committee with three members voting yes and seven voting to release it on its merits. Those seven didn’t officially take a stand, but their vote indicates they think the House should have the chance to debate the issue.

Kowalko said the next step for the bill is for him to hear input from the state’s Department of Justice.

If they are favorable, he will ask House Speaker Pete Schwartzkopf, D-Rehoboth Beach, to put the bill on the House agenda in April.