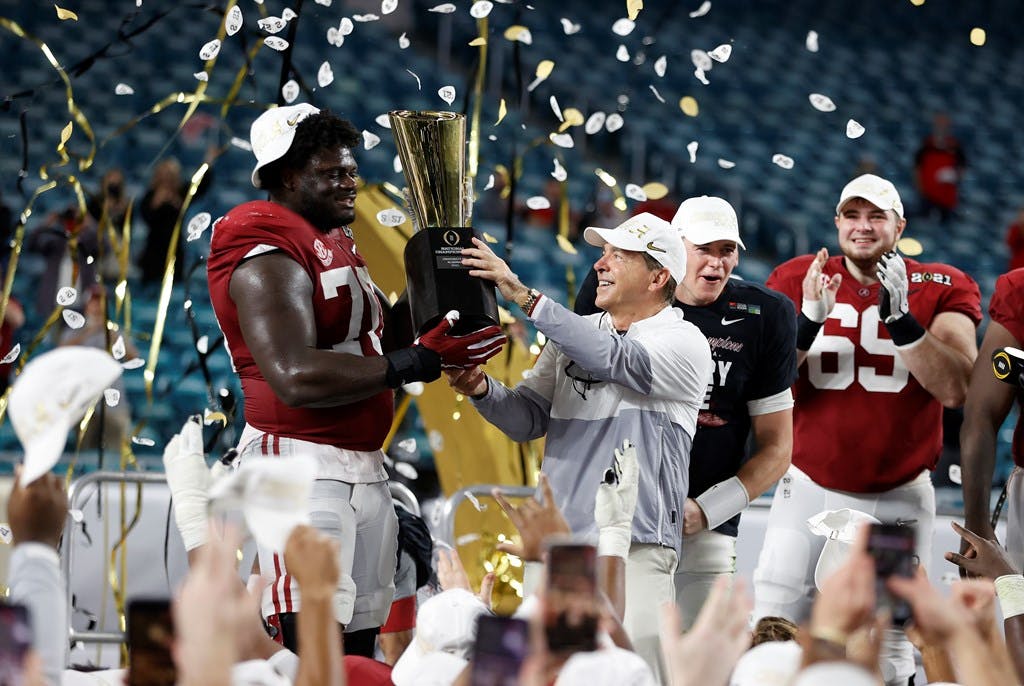 Here are our takeaways.

Trey Sermon and the run game meant more to OSU’s offense then maybe we thought.

Ohio State finished their regular season a perfect 6-0, including a win over Northwestern for the Big 10 Championship. The offense for Ohio State has been potent all year long and most people attribute that to potential top 10th pick, Quarterback Justin Fields.

When we dive into the numbers and take a look at what head coach Ryan Day likes to do, we can see the run game was the central focus for this offense.  For the entirety of this season  — eight games including bowl games, Ohio State ran the ball on average 43 times a game for 257 yards a game.

Justin Fields averaged 28 passes per game for 262.5 yards per game. Ohio State loved using the run to set up play action for Justin Fields and that is where he found a majority of his success all season.

In Ohio State’s big wins this year against Indiana, Northwestern and Clemson, it  was the run game that stole the show.

When Ohio State lost Sermon in the title game, it was both demoralizing from an emotional standpoint but also devastating from a production standpoint as well.

Devonta Smith is worth a top 5 pick

Smith had awe-inspiring stats of 117 catches for 1,856 yards and 23 touchdowns. Do me a favor and reread those numbers. Process it yet?

Smith runs great routes, has extremely long arms and phenomenal hands. The best part of Devonta Smith is maybe his clutch gene. Whenever you need a big play he answered. Whether you needed five yards or 35 yards, he would move the sticks or put up points.

Even though he doesn’t have Jayden Waddle speed (few do), he has more speed then many.

Sorry, Eagles fans: I don’t see the Heisman trophy winner making it to pick 6 on April 29.

Sarkesian might be best candidate to turn Texas around.

This year’s Alabama offense will go down as one of the best offenses in college football history. They broke a number of records as a team as well as individually.

One major reason for the success, apart from some of the best offensive weapons in college football, was offensive coordinator Steve Sarkisian. He was hired shortly before the National Championship game to be the new head coach of the University of Texas, one of the biggest jobs in the nation.

Yes, we do remember not that long ago he had issues in 2015 at USC, but he has come a long way since then.

Watching Alabama’s offense this year was special. Not only were they that good but Sarkisian maximized the talent he was dealt and put them in the perfect position to succeed.

In the National championship  game Monday , the Alabama offense made it look easy.

The play calling was superb and Sarkisian somehow was able to scheme open, maybe the best playmaker we have seen in three decades. He was also able to maximize the talent of Mac Jones, a quarterback most people didn’t expect to have the season he did.

Alabama’s offense was simply unstoppable at all points and Sarkisian was a big factor.

Mac Jones should be taken in the first round of the draft.

Jones has had an interesting career since swapping his commitment from Kentucky to Alabama. He arrived at Alabama as an early enrollee and according to Saban has drastically improved every year.

Coming into this season most people were unsure who the Tide’s quarterback wold be. Mac Jones had filled in for an injured Tua Tagovailoaa for a few games in 219, picking up three wins in four games over Western Carolina, Arkansas and a Citrus Bowl win over Michigan. His only loss came to Auburn University in the Iron Bowl.

However, incoming five-star freshman Bryce Young had some people thinking he would start, and the two battled throughout camp for the job.

Saban said it best Tuesday morning: “I think Mac Jones had a phenomenal season. I mean, the completion percentage that he had, the accuracy, the command of the offense, the understanding of coverage and getting the ball to right guys, consistency in performance, a guy that’s played awesome. “

Saban said his season reflected his growth in the program because Jones improved each year.

“He actually said to me on the stage last night when we were getting the championship trophy … ‘Can you believe this, from a scout team quarterback to winning a national championship?’ I think sometimes people aren’t willing to make the kind of sacrifices that you have to make to go through that kind of development to eventually become the kind of player Mac has become.”

Jones capped his spectacular career with a few records as well. JHe broke the NCAA record for completion percentage (77.4%) and threw for 4,500 yards and 41 touchdowns.

Did I mention with the scheduling this year he played against an all-SEC schedule? I can see a few teams giving him a look in the first round, such as Washington (No. 19), the Colts (No. 21) and potentially the Steelers (No. 24).

This might not be popular with the masses, but it’s one I truly believe could benefit the Ohio State quarterback. Fields had a great year last year for the Buckeyes in 2019, throwing  for 3,273 yards and 41 touchdowns while leading the Buckeyes to the playoffs in the last two years.

Fields had a better year last season with a regular schedule, which isn’t too surprising considering the difficulties brought on by Covid-19. The numbers were obviously down this year with Ohio State only playing eight games, including the playoff but Fields was not as sharp and seemed to be battling some injuries.

Even though I said earlier that Fields benefits greatly from a strong run game, I do view him as a top 10 prospect in the upcoming draft.

I just think another year at Ohio State with some regularity and more reps could gain him the momentum he missed this year and lead Fields to be the face of the sport next season and a potential top draft pick that’s better prepared for the NFL.

After a tough loss in the National Championship in 2018, many tweets and articles talked about the end of the dynasty in Tuscaloosa. The Crimson Tide had just lost the title to Clemson and the skeptics were everywhere.

In 2019, the Tide didn’t make it through the playoffs. But here we are two years later and once again Nick Saban’s Tide sits atop the college football world. Not only did they win the title but they went almost unchallenged all season long.

On their way to that national title they broke records and won Heisman trophies playing against an all-SEC schedule, something that has never been done.

Last season Saban dealt with major injuries, including now NFL quarterback Tua Tagovailoa that limited that offense’s capability. But this year, even with an irregular season and difficulties due to Covid-19,  Alabama stood above the rest. New quarterback,

It also seems like every year the college football fans seem to identify a new conference supposedly better than the SEC. A few years ago it was the Big 12 with Oklahoma, Baylor and Texas. Some thought Ohio State, Michigan and Penn State would take over this time period.

But year in and year out, Alabama and the rest of the SEC find themselves amongst the best teams in the country. We saw it again this year where the SEC played the most games, had the tougher opponents and still came out with a national title.

The SEC now accounts for four out of the last six national championships.