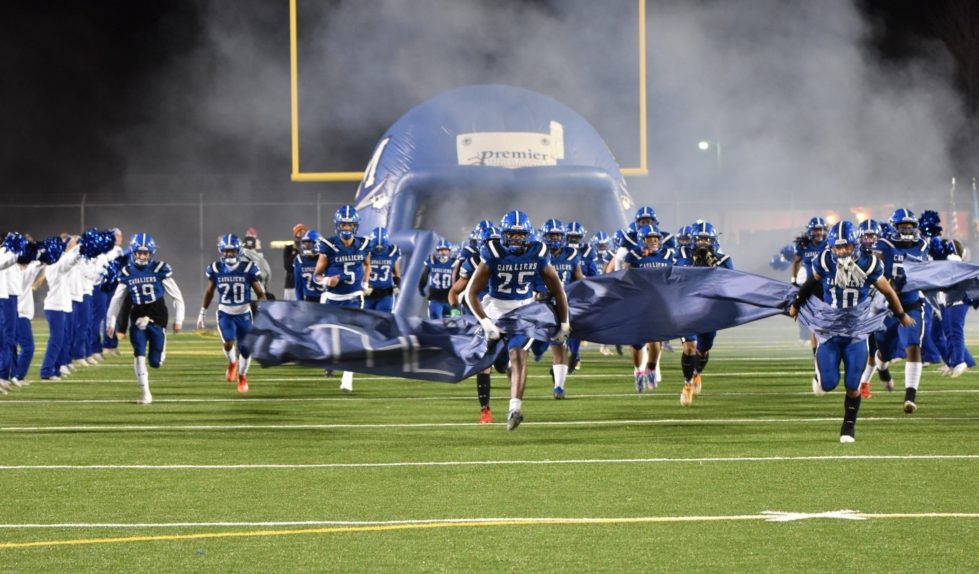 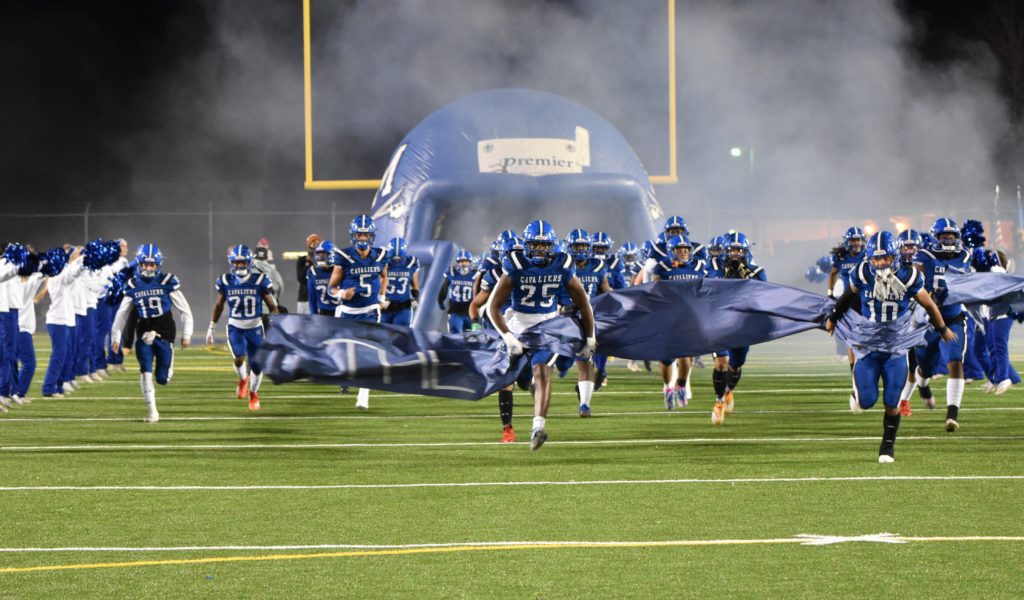 Middletown – The Middletown Cavaliers advanced to their 10th championship game since 2010 with a 33-15 win over long-time rival Salesianum Saturday night in front of a sellout crowd. Big plays were the key for Middletown as all five touchdowns covered 31 yards or more.

The game began with the longest play of the night when Zy’Aire Tart took the opening kickoff 95 yards for a score just :15 into the contest. The extra point attempt was blocked, giving the home team a 6-0 lead. After that early explosion, the two defenses took control, forcing 6 turnovers. Middletown lost two fumbles and Braden Davis threw two interceptions, while Sallies QB (Conor Campbell) was intercepted twice as well.

One of the Middletown fumbles led to a Salesianum touchdown in the 2nd quarter. Joe Simmons recovered a fumble at the Cavalier 16 yard line. Campbell carried the ball inside the one yard line, then Andrew Ransome plunged into the endzone to tie the game at six with 4:58 left in the half. James Collins gave his team the lead with his extra point kick, but that would be the only time the Sals would lead in the game.

Middletown’s Ryan Cheaton blocked a punt late in the half, giving the Cavaliers the ball at their own 37, but 3 plays later another lost fumble gave the Sals a golden opportunity to add to their lead. On the 1st play, Campbell went back to pass and Cheaton made another “big” play, stepping in front of the intended receiver at the 35 and raced downfield for a 65-yard “pick-6” with just :54 left in the half as the home team regained the lead for good. The extra point failed and the Cavs took a 12-7 lead into the locker room.

Middletown extended its lead to 18-7 with 5:22 to go in the third quarter as Davis hit Ty Hynson in stride for a 31-yard score and a little “breathing room”. That was the only touchdown in the third as the two teams battled into the final quarter with the crowd getting louder with each play.

Salesianum tightened up the game with a Conor Campbell 6-yard run and a conversion pass to Samuel Dumas that cut the Middletown lead to 18-15 with 8:49 left in the game. The Cavaliers would answer with 4:36 to go as the Davis-to-Hynson connection worked again on a 37-yard pass play and a 26-15 advantage.

Middletown would “put the game on ice” as Tart intercepted a Campbell pass at the 9 yard line and sprinted downfield for the 2nd longest play of the night, a 91-yard “pick-6” to complete the scoring at 33-15.

Middletown out-gained Salesianum 273-197 in total yards. Campbell accounted for all but 20 of the Sals yardage as he ran for 100 and passed for 77. The Cavaliers rotated running backs Josh Roberson (44 yards) and Michael Pearson (49 yards) throughout the game and finished with 113 yards on the ground. Davis completed 17 of 26 pass attempts for 160 yards, two touchdowns and 2 interceptions.

Salesianum finished the season with a record of 8-3 in their 1st season competing in a conference and also playing against a schedule of “in-state” opponents for the 1st time in school history.

Middletown will face “Harvest Bowl” rival Smyrna, next Saturday at Delaware Stadium for the inaugural Class 3A title. The Cavaliers won the regular season matchup 28-14 back in September. The two teams have met twice in the title game in 2016 and again in 2017 with Smyrna winning both times.