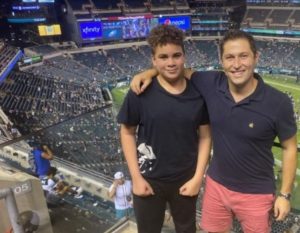 MacKenzie Scott’s donation to Big Brothers Big Sisters of Delaware may help add hundreds of children and fund bonding activities like trips to the Eagles games.

A surprise $900,000 donation from philanthropist MacKenzie Scott will double the annual budget of the Big Brothers Big Sisters of Delaware.

The organization, which pairs at-risk children with adult mentors, is still discussing how to use the donation, which the organization did not apply for or know about until the staff got a call, said Anya Lindsey-Jenkins, executive director.

The organization now has 1,100 children paired with mentors and would like to dramatically expand that, especially in Sussex County, Lindsey-Jenkins said. Even before the donation, 125 children were waiting for matches.

Big Brothers and Big Sisters’ annual budget usually is a little under $1 million.

The Delaware group’s donation was part of the $122 million that Scott gave the national organization. The Delaware group was one of only 38 of the 232 Big Brothers Big Sisters agencies to receive a gift.

An author who divorced Amazon founder Jeff Bezos, Scott is worth $36.2 billion, according to Forbes. She is considered one of the five richest women in the world. With many other billionaires, she pledged to give away a lot of her money in her lifetime.

Lindsey-Jenkins said the organization was told that Scott’s foundation had researched them and their impact before making the donation, which is unrestricted.

“It’s definitely a testimony to the work we’re doing in the community and the need for mentoring in Delaware,” she said. “It is up to us to determine what we think the community needs and how we decide how we want to serve it using those funds.”

The donation was also the largest to the national and the Delaware organization since its founding in 1964.

Right now, Big Brothers finds children through schools, their families and other organizations. Adults — from the age of 18 to 70 –all volunteer. All volunteers are rigorously vetted, Lindsey-Jenkins said.

Both the families and the volunteers, who are not paid in any way, go through training about what to expect.

The nonprofit also creates events for the “littles” and “bigs” to attend together and bond over. A recent trip to an Eagles game for sports-loving pairs proved popular, she said.

The organization provides case management guidance if a volunteer or family should have a life-altering event, ranging from the death of a family member to dealing with helping a child pick and apply for colleges.

Lindsey-Jenkins said relationships typically last a year, but some go on to last much longer, even a lifetime.

While specific programs have not yet been decided on, Big Brothers would like to use MacKenzie Scott’s donation to double its statewide numbers.

“We’re seeing a significant increase in the need in the southern part of Delaware,” Lindsey-Jenkins said. “We have seen about a 20% increase in Sussex County.”

Bigs & Blue connects children with members of law enforcement. It’s meant to help children get a 360-degree view of officers and see them as people with lives away from the uniform.

Beyond School Walls is designed to help link littles with people who work in an area the children are interested in exploring as a possible career. It’s working with Howard High School and its Finance Academy and J.P. Morgan Chase to connect kids with mentors in the financial sector that may not otherwise have had a chance to meet.

Lindsey-Jenkins, who headed Big Brothers for a year, hopes the recognition that the donation provides to the program will help position it for future donations and grants.

She isn’t worried about starting programs with Scott’s donation and then having to maintain them once the money is spent.

“We’re confident in the work that we do and we have an amazing staff,” she said. “When we talk about increasing numbers and building capacity, we have a strategic plan to continue to provide that level of service throughout the state.”

To help place your child with Big Brothers Big Sisters of Delaware, or to volunteer as a mentor, go here.