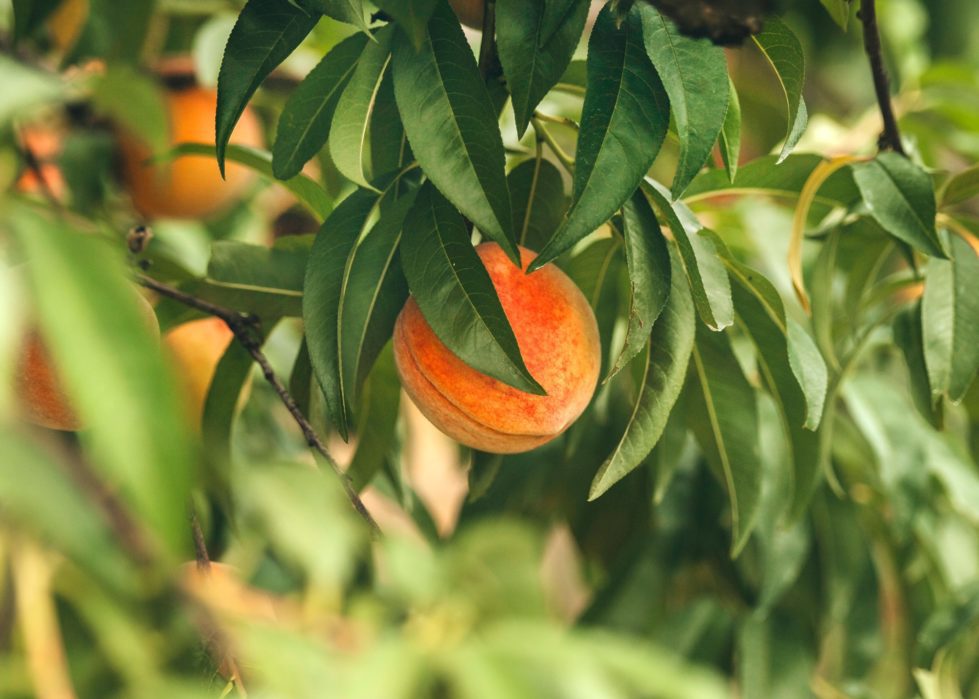 Peach picking is one of many activities that Fifer Orchards offers on its farm.

Delaware is known for two things this time of year: beaches and peaches.

It’s prime peach-picking time, but before you head out to the orchards there are some things you should know about Delaware’s peach industry.

Dr. Carol E. Hoffecker writes in her 1988 book, “Delaware, The First State,” when the Chesapeake and Delaware Canal was being built, a farmer near Delaware City named Philip Reybold began raising milk cows and peach trees. He first sold his milk, butter and peaches to the men working on the canal. When the canal was finished, he shipped his products through the canal to Baltimore.

“He also used the new steamboats on the Delaware River to send fresh peaches to Philadelphia. When other farmers saw the success of Philip Reybold, they began planting peach orchards also. Delaware peaches became famous in Philadelphia and as far away as New York City. Philip Reybold showed other Delaware farmers how they could make use of the new rapid transportation to sell their crops in distant cities.”

It wasn’t long before peach orchards began popping up around the state, and soon, over 800,000 peach trees would be planted, yielding millions of pounds of juicy fruit each harvest.

The state’s railroad system made it possible for farmers throughout the state to sell their peaches to larger markets. One stop on the historic railroad was Wyoming, Delaware.

Wyoming is home to one of Delaware’s oldest and largest peach-producing operations, Fifer Orchards.

Fifer Orchards was founded in 1919 by Charles Frederick Fifer. Fifer moved his family from the Shenandoah Valley of Virginia to the fertile lands of Kent County to pursue his passion to grow high-quality fruits and vegetables.

More than 100 years later, the farm is still run by the Fifer family.

Michael Fennemore is part of the 4th generation of the family farm, along with his cousins, Bobby, Curt and David. His mother Mary and uncle Carlton are active third-generation family members. Together, they all work full-time running the farm.

“Farming is in our blood,” Fennemore said. “We have a passion for the noble profession and lifestyle that we are blessed to participate in. Feeding our families and our community with safe, fresh, healthy, nutritious and delicious produce is truly an honor and a responsibility that we hold near and dear to our hearts.”

Delaware lost its status as the country’s leading producer right around the time Fifer’s Orchards was established.

The disease leads to premature ripening of the fruit. While the peaches develop color early and are large in size, the taste is bitter and their quality is inferior.

Nearly all of Delaware’s peaches suffered, and Fifer’s peaches were no exception.

“Many farmers never recovered from this disease and went out of business,” Fennemore said. “We were fortunate that Charles was more diversified than most growers at that time.  He was growing a variety of fruits and vegetables when most growers in the area had 100% of their land planted in peach trees.

“The diversification that Charles practiced allowed him to sustain the losses of the peach yellows at that time and also survive the Great Depression. He lived by the philosophy ‘don’t have your eggs all in one basket.’ This remains good advice and is still applicable today on our farm.  Having crop diversity has helped us navigate losses from freeze, frost, hurricanes, pests and other challenges that are out of our control.”

That philosophy has sustained more than a century of business.

Fennemore credits the sense of hospitality customers experience at the farm store for keeping them coming back.

“When folks visit our Farm Store, they are also visiting our home,” he said. “We want them to feel that sense of family and hospitality when they visit.”

Fennemore said the most rewarding aspect of his job is helping to educate and entertain the community as they host them on the farm each growing season.

The farm offers a ‘u-pick’ experience, which allows customers to pick their own strawberries, blueberries, peaches, apples, pumpkins and sunflowers directly from the source.

Above all else, Fennemore said, “We’re proud to call Delaware home and are grateful for such a supportive community of friends and neighbors.”

Appoquinimink rallies in the fifth inning to defeat Conrad 12-6
State Fair will be back in full swing this year
Prominent Democrat among those vaccinated Friday in Wilmington
ChristianaCare to require staff vaccinations; only system so far to do it