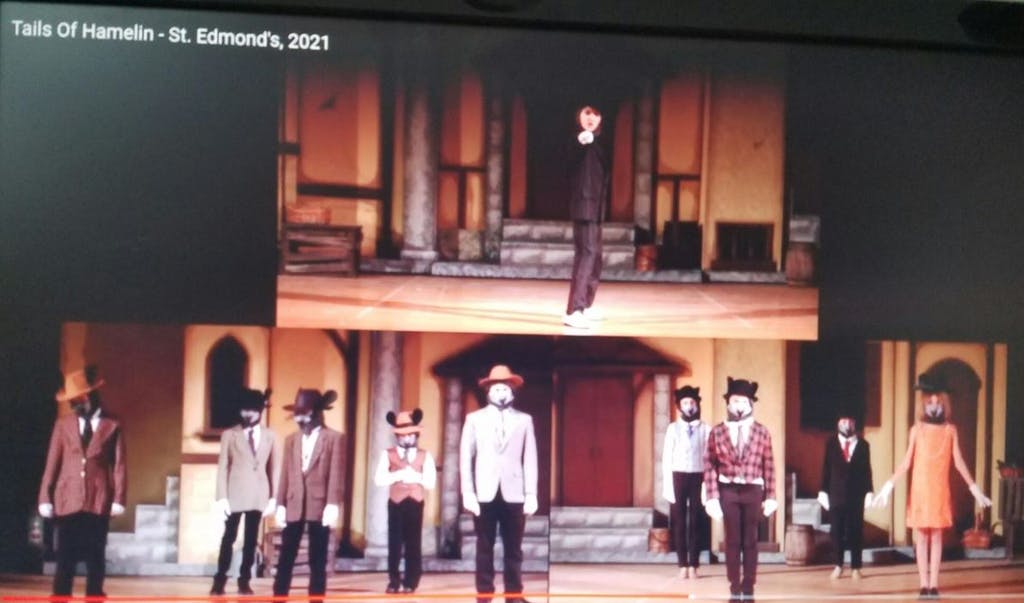 The show had one in-person gathering with some cast members to create a dance scene.

Instead of “Lights, Camera, Action!,” several St. Edmond’s Academy students heard “Lights, Zoom, Record!” as they prepared to perform for their May 7 spring musical, “The Pied Piper: Tails of Hamelin.”

Due to COVID-19 restrictions, SEA theatre buffs put on a “remote” musical because “the show must go on(line)!,” according to Deb DeHart, the school’s choral and performing arts director.

“It is so much more complicated to do a virtual production,” said DeHart, who served as producer, costumer and music director. “Against all the odds and all the challenges, we have done it.”

Besides making recordings available and teaching the music, the entire musical – from auditions to rehearsals to recordings – was done virtually, with the exception of a few of St. Edmond’s choir  boys and one day of dance performances as part of filming.

“I had to learn a lot of technology to make this happen,” said DeHart. “It makes doing a live musical look SO easy.”

She said there was an upside to creating a virtual musical.

“There were times that virtual was a plus – like when we had the snowstorms or when students had to quarantine because of potential contact with someone who might be positive for COVID,” she said. “We did not have to cancel or struggle on without some of the cast. Our students are also now more independent and responsible because of what was required to do a virtual production.”

St. Edmond’s 7th-grader Don Bogey, who played Schmalz, Hamelin’s burgermiester, said that while he prefers in-person plays because it’s easier to act in, “I’d rather have a virtual play than nothing at all.”

His castmate, Luke Merritt, an 8th grader who played The Pied Piper, said taking on the virtual role was definitely unique.

“Being in a virtual musical,  while being fun, also comes with the extra burdens of distance and technological issues,” said Merritt. “It was challenging to learn dance moves from a screen and to practice songs with lag time, but that effort wasn’t wasted when you see the final result and burst with pride to realize we did that together, working as a team.”

So, how does a remote musical work exactly?

From auditions to opening night, everything was tweaked to produce a virtual show:

Auditions – Interested students completed an online form and received either a song sheet to study and/or a dance video to watch. They had two weeks to practice singing (or dancing), record the song via Google classroom and send it to the audition panel. Although St. Edmond’s is an all-boys school, sisters of students as well as girls who attended the school’s summer theatre camp are eligible to audition.

Rehearsals – Once the cast was selected, all students received an email about their role and a schedule for rehearsals, which were Wednesday and Friday nights and Sunday afternoons – all through ZOOM links.

Recording each song – Each student had to record their songs by singing them at home ‘into’ their laptop and then uploading them to Google classroom. Director Jeff Reim managed the dialogue, as well as serving as editor for the master track and the final film. 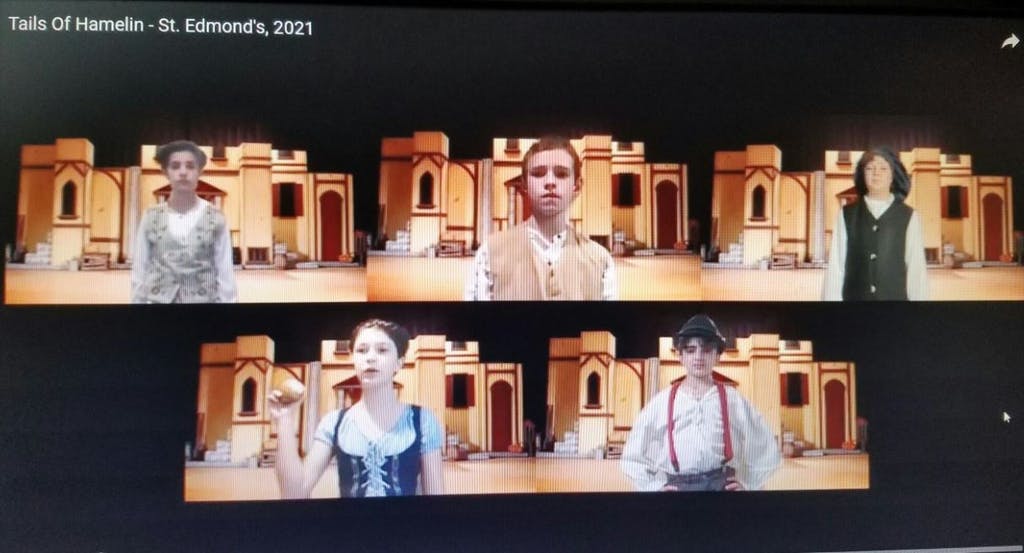 The final video included choreography that emphasized the upper body.

Dance Numbers –  Deb Coupe choreographed all the songs — “a daunting task knowing that only a few would actually be performed live that the full body moves can be seen,” said DeHart. “She created a lot of upper body choreography that looks great, but she was also considerate of the variety of ability and experience levels in the cast.”

Set Design – Reim designed the set, managed the lighting and took pictures of the set so the students could use them as virtual backgrounds on their screens. 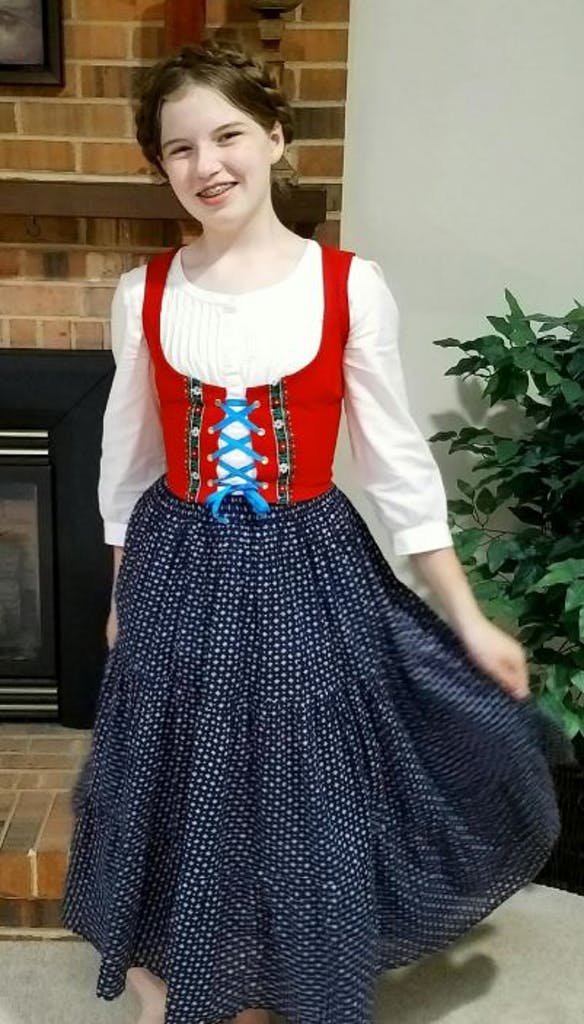 Rachel James shows off one of the costumes sewn by showmoms.

Costumes – Students took their measurements and submitted them to DeHart, who worked with several mothers from the cast to make costumes for the leads. A hair tutorial on YouTube was shared with the girls in the cast so they would be familiar with what type of braid their role called for.

Creating the online link – After all recordings were done, the gargantuan task of putting it all together was left to Reim and his crew, said DeHart.

Opening Night – On Friday, May 7, at 7 p.m., students in the musical – as well as two guests per student — were able to gather at St. Edmond’s auditorium to watch the show on a movie screen. A link was given to cast members before the show for them to share with family and friends at home, so they could watch the show online.

DeHart said the final product was well worth all the effort.

“The kids have taken this all on – learning lines, cues, dance moves, songs and the technology, which is the only way we can do this, showing up when they are supposed to, memorization and also learning theatre etiquette and protocols,” she said.  “They are real troupers and we are very proud of them. They have grown so much as performers and learned some good lessons in independence.”

Merritt added, “Being in a virtual musical has its challenges, like learning your lines properly and blocking movements, but the end result was worth all the effort due to the joy” it ultimately brought everyone.

More about camp: Saint Edmond’s hosts a summer theatre program through Shoestring Productions of Brandywine Valley each year. This year features two live classes and one virtual class. Students are allowed to apply for next year’s spring musical. For more, go here.