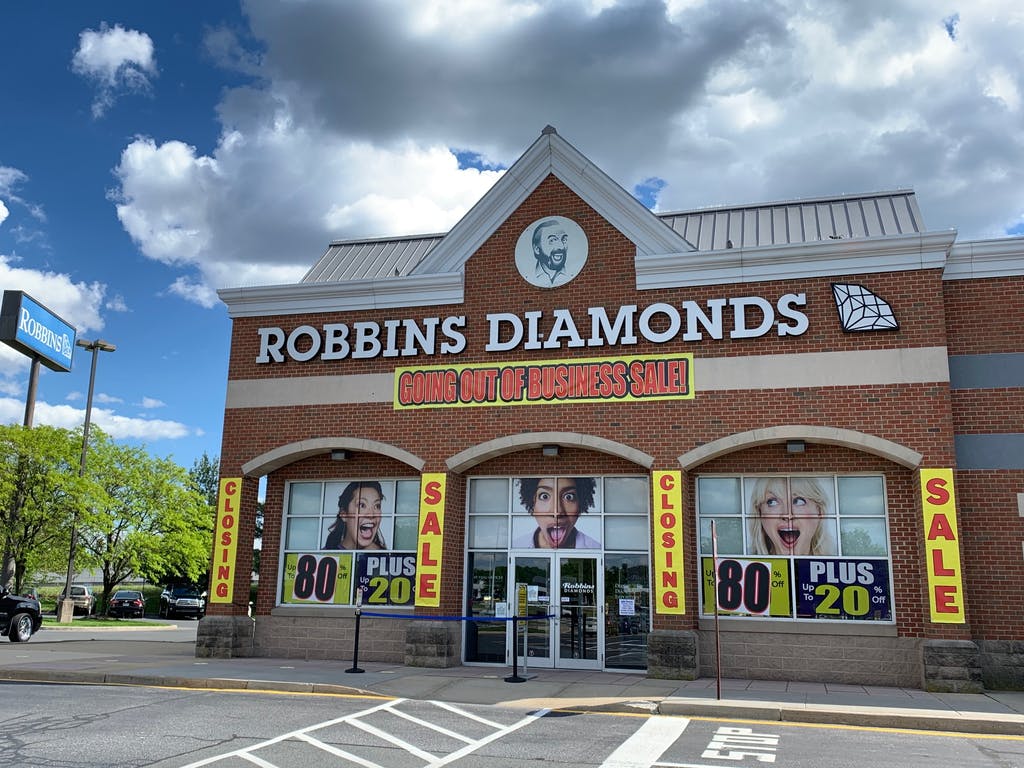 Robbins Diamonds soon will close its Delaware store, the last in the family-owned chain

If you grew up around Delaware and had a television in the 80s and 90s, you probably recognize the late Jerry Robbins, the guy with a diamond in his beard, from his catchy jewelry commercials.

You might find yourself trying to remember the original lyrics Bobby Day and Michael Jackson sang before “Rockin’ Robbins,” one of Robbins Diamonds’ famous jingles that was sung to the tune of “Rockin’ Robin,” went into heavy commercial rotation.

You probably recall the shock of seeing the company’s interstate billboard showing a fiancée-to-be seemingly flipping the bird — really, her ring finger — with the tagline, “She’s tired of waiting.”

The four-generation Robbins Diamonds has been the creator of earworms and fun memories for decades, but the business and the fun is coming to an end.

Gordon Robbins, Jerry’s son, soon will close its Delaware store, the last of its locations, and then retire.

Gordon followed more than one family tradition. Like his famous father, he also voiced radio commercials that continued into the Roaring (20)Twenties. Also like his famous dad, Gordon can always count on a brother — in Gordon’s case, Jason — to be within arm’s reach in the business.

He said he’s looking forward to retirement and plans to spend time with his wife, go fishing, and travel to warm domestic and international climes.

But he has mixed feelings about the final store’s closing.

“Business was going well before COVID,” he said. “I had tried to sell the store for the past three years or so, knowing I was leaving, but the nibbles never manifested into a sale. I’m thrilled to be retiring but I’m disappointed to be the one who’s shutting it down.”

Robbins Diamonds – which expects to end its going-out-of-business sale in the coming weeks – began in 1949.

It started as Leo Robbins’ iconic booth in Philadelphia’s Jewelers’ Row, then branched out to locations around Philly  and finally in Delaware. In the First State, it opened  in 1997 at 101 Geoffrey Drive, across from Delaware Technical Community College, to leverage the First State’s tax-free shopping, parking and easy interstate access.

Meanwhile, the family kept the fun going in their Philly motherland.

Robbins’ annual city-wide scavenger hunt awarded one couple, out of more than 500 yearly participants, a diamond engagement ring worth five figures from 2008 through 2012 — even though the company by then had closed all but its location in Delaware during the recession.

At one Valentine’s Day Flyers game, a few hockey “lovers” found themselves blindfolded and digging through a tub of cake batter for a chance to win a pair of one-carat diamond earrings.

The gemologists even got involved in celebrity boxing by joining WYSP for their 2008 bouts featuring Danny Bonaduce, Phil Margera and Rowdy Roddy Piper.

One year, the Robbins store at  8th and Walnut opened its doors for a charity exhibition, featuring the Lazare/Kaplan One Million Dollar Bruster’s Ice Cream Cone. Proceeds from the work of art’s tour, and the sale of replica pins, supported Big Brothers Big Sisters of America.

The company stayed in the retail spotlight with its commercials.

Then there was “Rocks You Got,” (to the tune of “Who Put the Bomp”) that included some female vocals, such as that of Lauren Hart, who sings for Flyers games.

“Rocks at Robbins” was a play on “Little Darlin’” (ay-yay-yay-yiiii)…and the list goes on.

Even before the music, the commercials were notable for showcasing Jerry’s deep voice, and scenes in which he almost always had brother Ron by his side. Ron’s role was often to give Jerry a good sibling ribbing.

Humor and lightheartedness being a core part of their brand, they added a 3-D component to their promotional arsenal. In 2008, a mascot was born—Rockin’ Robbins, modeled after the spangly-stubbled Jerry. The mascot represented the company at the Diamond Dash scavenger hunt, as well as sponsored events like the BenFM Birthday Bash with Loverboy, Rob Base & DJ E-Z Rock and Shannon, and the MMRBQ.

Right now, it’s on display at the Delaware store where part of it has been turned into a museum of the company’s history. One bay is covered in photos of staff members over the years, another in photos of the family and another features the mascot with photos and videos of his forays into the public.

Robbins Diamonds doesn’t yet have a final dates, but the sale has brought swift business from the soon-to-be-engaged as well as longtime customers. Crowds are biggest on weekends.

The company had closed its other locations and focused on the Delaware starting in the 2008-9 recession. It did suffer from the COVID-19 pandemic shutdown, Gordon Robbins said.

“But (we’ve) really rebounded nicely as an industry and have nothing to complain about,” Gordon said. “People have been coming in to share memories, and it’s been heartwarming.”