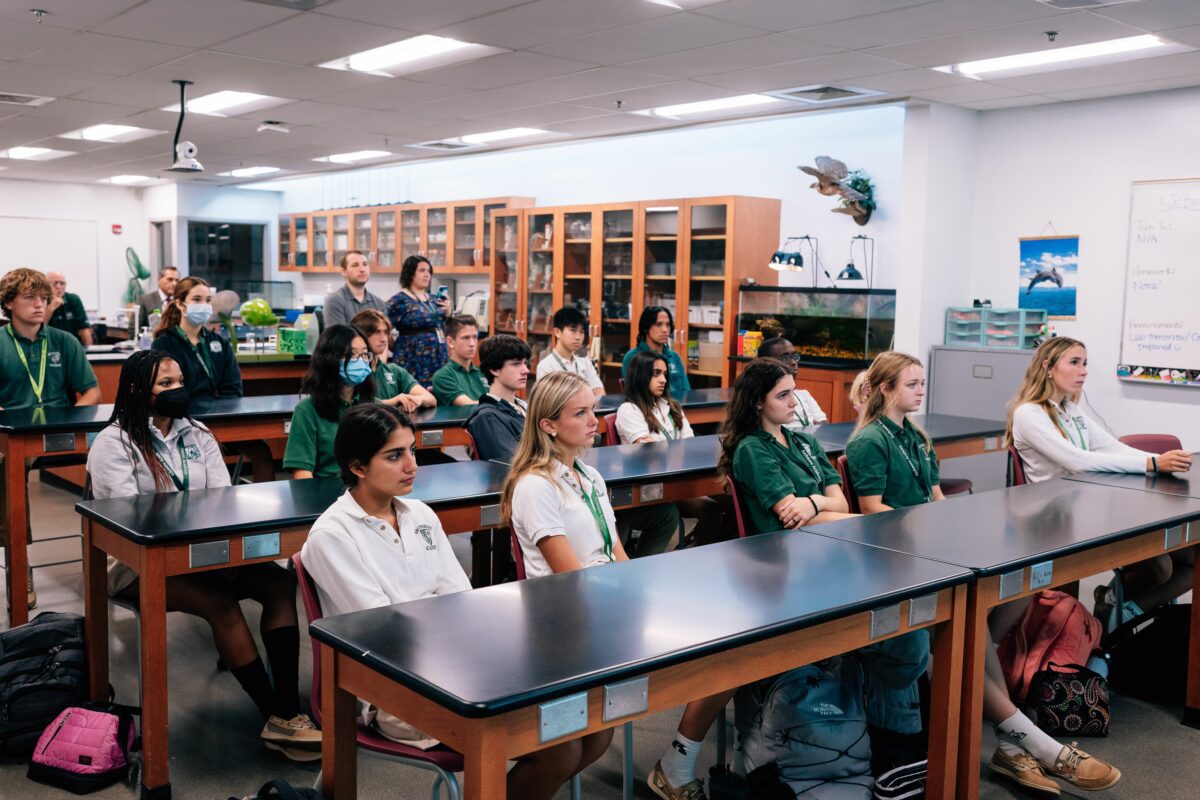 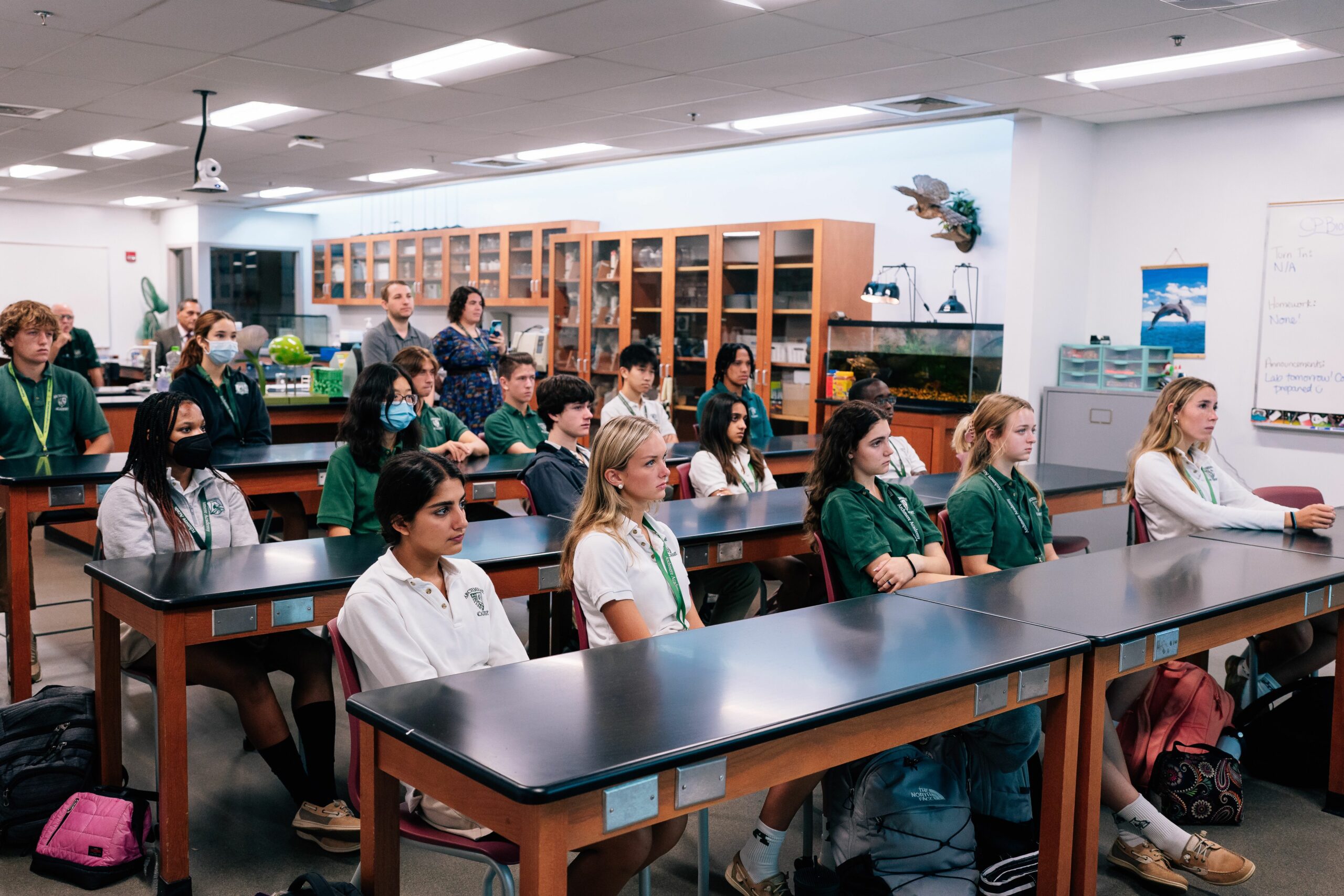 Students in Archmere’s Advanced Cancer Research and Analysis watching a presentation from Dr. Jay Storm from earlier this semester.

Archmere Academy’s Lydia Scarpaci wasn’t sure what she wanted to pursue next year in college – until she enrolled in the school’s Advanced Cancer Research and Analysis class.

The course, in its pilot year, came out of a partnership between Archmere and Children’s Hospital of Philadelphia (CHOP).

It’s designed for students who are interested in the medical field and is split into three parts: a genetics class, a data analysis class and an internship with CHOP.

“The class has definitely confirmed that I want to go into the medical field,” Scarpaci said. “Everyday I go into that class, I’m so interested and engaged, and can honestly not take my eyes  off of the board. It’s so fascinating to me.”

The other 17 students in the class are, too, Scarpaci said.

“The notes are always interrupted with a lot of questions because everyone who’s in that class has the same interest and is really into the medical field, so it feels super productive every day.”

The school developed the class with CHOP’s Jay Storm, who graduated from Archmere. He helps lead the hospital’s Center for Data Driven Discovery in Biomedicine, which they refer to as D3B.

A year later, Storm approached Archmere with the idea for a class that would focus on cancer causes, treatment and data involved with tracking a patient’s journey to recovery.

This semester, students will be taking the genetics portion of the course. They’ll learn about the purpose of the D3B program by studying cancer, its causes and treatments.

“Right now, it’s a lot of discussions, and we have a lab once a week,” Scarpaci said. “In our most recent lab, we were looking at bacteria, and we made different solutions looking at plasmids and testing how that would affect the growth of bacteria.”

Leah Davidson-Wolf, an Archmere biology teacher, leads the genetics portion of the class this semester.

Next on the agenda, she said, is learning about gene editing.

“We’ll be starting a lab soon learning about CRISPR techniques, which is essentially gene editing,” she said. “Our kids will learn about how scientists are able to use gene editing techniques, and then they’ll apply it with bacteria.”

A lot of the labs she runs are similar to those available in upper level science classes, such as Advanced Placement Biology.

“But I’d say probably less than half of them have taken AP Biology,  so it’s an opportunity for students to get that additional learning without previously taking that advanced class,” she said.

Her labs focus only on cancer.

“Instead of using more general examples, I’ve been using examples that are more specific to cancer and how genes are expressed and the changes in expression that happen when cancer occurs,” Davidson-Wolf said.

In both the genetics and data science portions, keynote speakers from CHOP will come to the school, talk about related topics and take students’ questions.

“To actually really get to see the images of patients and hear from Dr. Storm himself about why a class like this is important, I think that really made an impact on the students,” she said.

“It’s just so amazing to see the work that he does, and it really gets me excited to go to college and explore what I’ve always wanted to do,” Scarpaci said.

Next week, a medical student who worked under Dr. Storm will be the keynote speaker.

Many of the class’s students will have to seek internships and apply to programs, maybe even medical school, just like Storm’s medical student, Davidson-Wolf said.

Getting perspective on how to get into medical school and earn internships in research labs is an invaluable experience for the students, she said.

Austin Curtis, a senior in the class who hopes to get into Yale to study biology, said his favorite part of the class thus far is the guest speakers.

Being able to ask professionals in similar careers questions about their experience is an experience Curtis hasn’t been able to take advantage of anywhere else, he said.

He said one speaker this week really stood out because he came in and talked about detecting and scanning for bacteria and cancer cells and how that’s used to diagnose brain tumors.

“Just seeing that real life example of where computer science and biology is mixing and used to help people is just really cool,” he said.

Davidson-Wolf will hand the baton to Matthew Wilcox when the second semester starts in January.

Wilcox, a physics and computer science teacher at Archmere, will teach the data science portion of the class.

In it, students will learn how to analyze data collected from patients in order to evaluate treatments and disease progression.

Wilcox said the class is still being developed, but a typical class would include D3B sharing actual data they have with the class, and the students working to analyze and contextualize the data.

The students will then be trained in how to run tests with a computer program, which has not been selected yet.

Finally, the students will learn how to visualize the data and understand the implications of the test results.

Wilcox will work closely with David Higgins, the informatics program manager at D3B, to guide which datasets are analyzed in class.

Higgins will provide a data set and provide some advice on what aspects of the data to look at and compare, Wilcox said.

“He’ll tell me that CHOP is interested in comparing this and that and asked if my students can run tests and report back to D3B on what they find,” Wilcox said.

The internship portion of the class is still being planned, but is expected to take place in the summer. It’s likely there will only be about seven spots available because of the size of the lab.

Organizers intend to have students shadow professionals  in the hospital and research labs, and work on a specific data analysis project.

“We would love to have all of our students get an internship, but I know that it is going to be based on time and the literal space in the lab,” Davidson-Wolf said.

Wilcox said he wants his students to learn to be more skeptical about the things they read.

“After taking my course, I want my kids to view the world and understand what assertions people make, but make sure they verify the data and tests someone has that led them to their assertion,” he said.

Davidson-Wolf noted that data science is now interwoven into so many aspects of medicine and literacy in data collection is paramount for success .

“In the medical field, research is an inescapable part of what you do, and if you don’t have any research experience until you get to college, it can seriously limit what you’re able to achieve,” she said. “The class helps them evaluate data, but more importantly it helps them evaluate if data is legitimate and good data.”