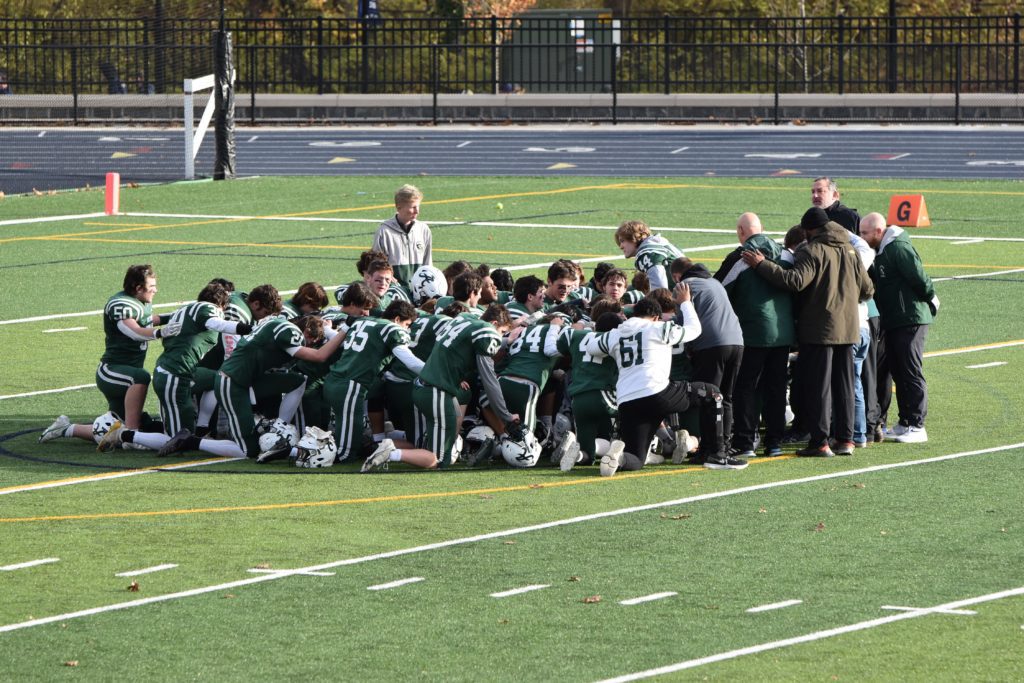 It was a rematch between #5 DMA and #1 Archmere on Saturday afternoon at Abessinio Stadium that would decide who would punch their ticket to Delaware Stadium to face Woodbridge in the Class AA championship.
It was all DMA in the first half as the Seahawks Defense did a fantastic job of limiting the potent Auk offense. After a Jordan Green Interception, DMA would score first on a Brian Alleyne touchdown run from 3 yards out, 7-0 Seahawks. Then, after a Kevin Decker strip sack, the Seahawks would add a 31 yd FG from Joseph Eyiolowope to extend their lead to 10-0 at the break.
Archmere would turn things around quickly in the second half. On th first play of the 3rd quarter Chris Albero would find his man Conor Udovich on a 73 yard touchdown across the deep middle, 10-7. DMA offense would try and respond as they put together a nice drive but would turn the ball over on a Devon Green fumble inside the Archmere 5 yard line. 10-7 DMA over Archmere going into the fourth.
The 4th quarter was all Auks and it started once again with a scoring play for Archmere. The Auk Defense would take advantage of field position and tackle Brian Alleyne in his endzone for the safety, Auks cut the lead to 10-9.
A little later on the Auks would out together a 68 yd Touchdown drive capped off by an 11 yd run by Chris Albero. Then on the the 2pt attempt, Conor Udovich would channel his inner OBJ and reach up with one hand and haul it in for the conversation. Auks take the lead 17-10.
On the next possession DMA would turn it over again in their own territory leading to an Albero 22 yd FG to extend the lead to two scores.
DMA offense would wake up on their next opportunity and drive the ball down the field. Brian Alleyne with a few spectacular plays on the drive, including a shifty 26 yard touchdown run to get DMA back within one score, 20-16. DMA defense would do their job on the next Archmere drive and force an Auk fumble on a trick play from Archmere. DMA would drive and get a goal-to-go opportunity with a chance to win the game. But the Archmere defense would stand strong and force an incomplete pass on 4th and goal to get the ball back. Still with some time on the clock, the Seahawks D would stop Archmere deep in their own territory with a chance to get the ball back on an upcoming punt. That punt would never be put in the air. DMA linebacker CJ Coombes unhappy about something on the field, would throw th ball down in front of the officials for a 15 yd unsportsmanlike penalty ending the game with a 20-16 win for Archmere.
Archmere will now be back in the state championship for the second consecutive season. They will take on another undefeated in the Woodbridge Blue Raiders on Saturday at 11:00 am at Delaware Stadium. Chris Albero finished 8-14 for 152 yds TD and an Interception. He also ran for 70 yards and a score on 18 carries. Conor Udovich led the Auks in receiving with 3 receptions for 83 yards 1TD and a 2pt conversation. DMA’s Brian Alleyne rushed 9 times for 79 yards and 2 TDs.