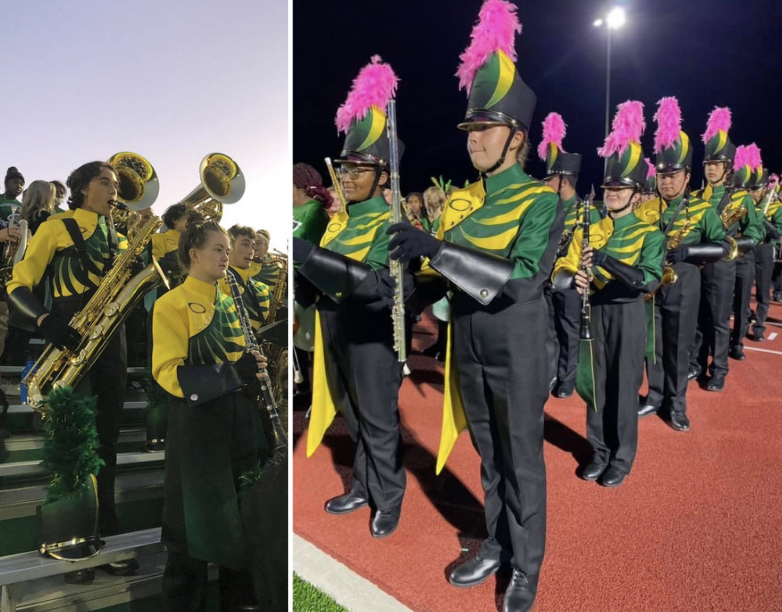 Saturday’s Sounds of Champions marching band competition at Odessa High Stadium shines a light not only on the bands, but on the importance of extracurricular involvement for high school students.

“Band has become a huge part of my life,” said Emma Sipes, pit section leader in Odessa High’s marching band. “It’s always the highlight of my day because I can see my friends who have become my second family because we show so much support and commitment to each other when working towards a show.”

What students like Sipes may not realize until they are old enough to reflect is that participating in this and other activities such as clubs, sports, cheerleading, Science Olympiad, robotics teams, mock trial teams, Future Farmers of America and more are building skills they will use their entire lives.

Not only do participants learn to set goals and work as a team, they also often learn leadership skills, sometimes simply by watching how others handle things.

The students learn to manage their time by juggling practices, performances, studies, friends and family.

They broaden their circle of friends and acquaintances, with freshmen walking into the first day of class already knowing dozens of people in different classes – and with a heads up about many of their teachers.

“You go through those two weeks in the summer camp where we saw each other from nine to five, and through practicing together and hanging out together, it really just built a good support system,” said Ruby Wall, the drum major in Odessa’s marching band.

Wall said being in band helps her value the process of setting goals, as well as committing endless hours of time and effort to achieve those goals.

Odessa Band Director Brian Endlein believes leadership, ownership, team-building and trust are byproducts of being involved in any kind of extracurricular curricular activity.

That participation also is benefitting the school, he said, by helping to create community and a sense of belonging.

“The greatest thing that any student can do when they get to the high school level is get involved with an extracurricular, whether that’s sports, athletics, activities, the arts,  because it’s so important for those students to have that sense of community,” Endlein said.

Salesianum School values extracurricular activities so much that it holds an Activities Fair early in the year to allow students to consider joining the 60 clubs offered at the school.

“Sports are really competitive at a lot of schools, so joining clubs helps us find the things we like in other aspects of school life,” said Jake Randall, a senior at Salesianum School.

He’s on the student council and participates in the mock trial team, Salesians for life, National Honor Society, scuba diving Club, and dodgeball clubs at school.

Mock trial has sparked his passion for law, which he now wants to pursue in college, he said.

“It showed me how much more writing was actually involved in law, which I didn’t realize before I joined the club,” he said. “It helped me be a lot better with my words and rhetoric, and has improved my ability to think on my feet.

“Especially in my English class, it’s helped me feel more comfortable presenting and also speaking in front of people without using notes.”

Jared Estrada, a senior at Salesianum participates in the Model UN, dodgeball, fantasy sports, Salesians in action, board games and “stay woke” clubs at school.

Being involved with them has helped improve his social life and communication skills, he said.

Gabe Spinazzola, a baritone saxophone player in Odessa’s marching band says being in marching band has given her a good sense of urgency.

“You only have a limited amount of time to produce a show,” said Spinazzola. “Every measure, every repetition, every minute you can practice needs to be put to good use.”

The band puts you in the mindset of being on time, being in the right place, Spinazolla said, and this required punctuality carries over to other areas of life.

Appoquinimink Band Director Ryan Moseley drills it into his kids head from day one that being early is to be on time, being on time is to be late and being late is unacceptable.

Sipes said committing to an extracurricular has helped her feel more prepared to go out into the real world.

It trains her to manage her time and put plans in place to achieve her goals and identify what she needs to do to have a successful day.

“Once we’re in the real world and we’re looking for a job, they’re going to look for if you as a person are on time, if you’re reliable, if you are prepared and motivated to meet your goals,” Sipes said.

Odessa’s Endlein said students who participate in things like band “understand that there’s more than just what we do in the four walls of the classroom, and they know that every little thing that they do helps contribute to our overall school community and culture.”

Extracurricular activities that involve summer camps or workshops also can make the transition between school levels smoother by dispelling any angst a student might have in a new environment.

“The students are able to build that community before the school year even begins, and it helps take away a lot of trepidation and that fear that students transitioning to high school for the first time might have,” Endlein said, “because now they know they have a support network of 40, 50, 60 upwards of strong friends that are going to take care of them and make them comfortable in their new space.”

Wall said she plans to push her children to join extracurriculars because of the value they bring  academically and socially.

“I would tell them to get involved in their school and activities as much as possible because it helps you build those relationship skills and helps shape you into a leader,” she said. “It makes you gain a sense of responsibility and motivates you to get your part done since others are relying on you and you’re relying on them.”

The buildup to something like Saturday’s band competition is stressful, Wall said.

But there’s also an overwhelming sense of excitement and reward because this is the marching band’s first show of the year, and they’ve been working for months to put it together.

Sounds of Champions starts at 3:30 p.m. and runs into the evening Saturday. Appoquinimink, Middletown and Odessa high school marching bands will face off against 13 others from Delaware and Maryland.

West Chester University’s Ram Band will perform at the competition’s end, giving judges a chance to tally the winners.

Each band’s performance will be around seven minutes.

Odessa’s band show will revolve around the theme of “To Build a Home,” Middletown’s theme is “I Wish” and Appoquinimink High will focus on “War and Peace.”

Tickets are $12 for adults, $10 for senior citizens and students, free for children six and under.