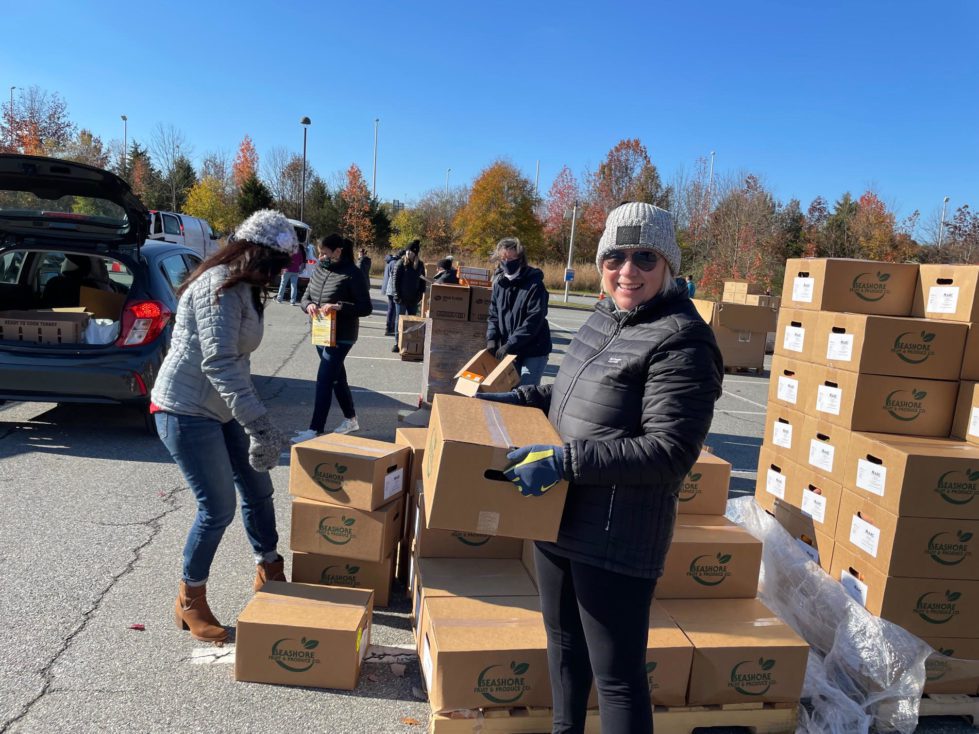 The Food Bank will return to Crossroad Church Monday in Georgetown. Photo from November event by Kim Turner.

The spirit of the season and a commitment to service are bringing the Food Bank of Delaware back to its Sussex distribution site a week after its last monthly distribution there.

When the Dec. 13 drive-thru pantry in Georgetown unexpectedly ran out of food with hundreds of customers left in line, organizers and volunteers put on their Santa hats and announced they’d hold another one Monday.

The drive-thru at Crossroad Community Church had planned to serve more than 1,200 clients.

But when a produce truck didn’t arrive as expectred, about 250 people were left without food in a month that usually sees the largest number of people seeking help, said Kim Turner, spokeswoman for the Food Bank.

Executive Director Cathy Kanefsky walked down the line of cars, apologizing and telling the drivers that the Food Bank would arrange another drive-thru for them.

Volunteers heard her, and said they wanted to come back and help on Monday, Dec. 13, Turner said.

“We are pleased to be able to hold a second food distribution in Georgetown this month, Kanefsky said. “When we realized we were not able to serve all who needed us last week, we quickly surveyed everyone who would need to be on board to host another distribution before the holiday week.

“The response from everyone was so incredibly heartwarming – from the volunteers to our staff to DelDOT and State Police to Crossroad Community Church. The resounding emotion was gratitude for the opportunity to serve and make a difference. We are all in this together, and the spirit of volunteerism is humbling.

So the gang will be return to Crossroad, starting at 11 a.m. that day and expected to end about 12:30 p.m., to make sure people have food for the holidays.

In addition to those who didn’t make it through the line, Turner said the Food Bank expects more people to sign up. Drive-ups are welcomed, if there is enough food. Recipients must bring proof that they live in Delaware such as a state-issued ID, utility bill, Delaware SNAP benefits card, etc.

“I’m sure there were people who were not able to make it last Monday and maybe their schedule will allow them to be there,” she said.

The Food Bank has been doing mobile drive-thru pantries in each county since COVID-19 hit the state. They allow large numbers of people to show up at central locations, and volunteers — often the National Guard — load food into the car’s back seat or trunk.

During the summer, officials there said the numbers had been trending down in spring and summer and they took a break in August.

When they returned in September, the numbers started rising again, particularly in Kent County.

November and December traditionally are the months in which the most people seek help, compared to summer and fall,  Turner said.

“There’s a lot of expenses at the holiday season,” she said. “So whether you’re paying for food or trying to buy gifts for your family or filling up your gas tank — we all know how expensive gas is right now. So I think it’s a combination of things.”

She said the Food Bank will be interested in seeing how many people seek help in January. Last year, many did but the numbers tapered off into spring and summer.

While the Sussex event was unexpectedly short of food, Turner said that the Food Bank itself always has a ton of support and donations in November and December.

If the staff had a Christmas wish, she said, it would be to remind supporters that people are hungry year round, not just at the holidays.

“So we hope,” she said, “that they’ll continue to keep our neighbors in need in mind when January, February and March roll around.”