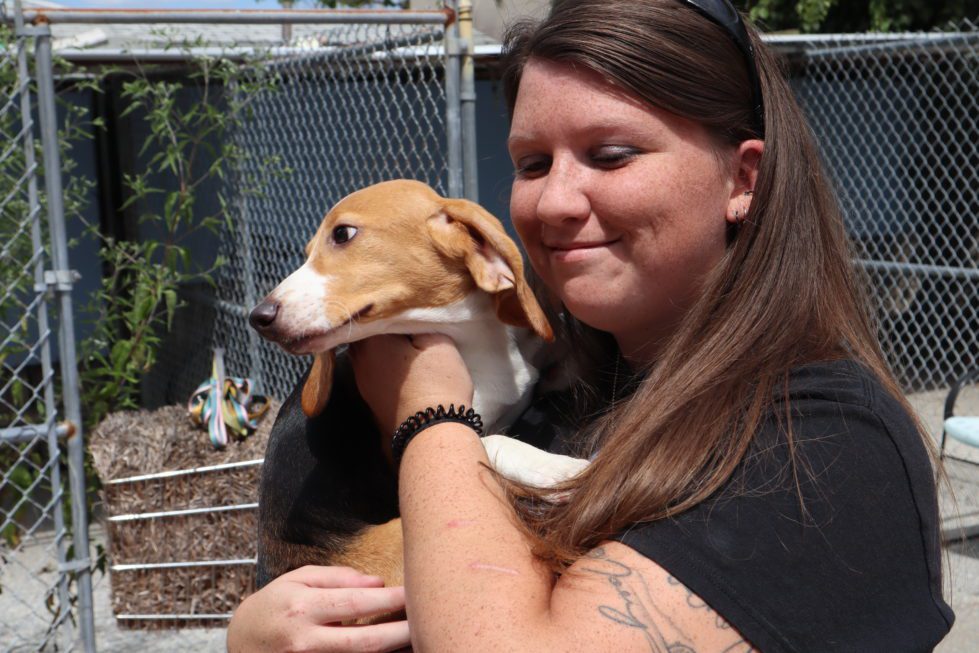 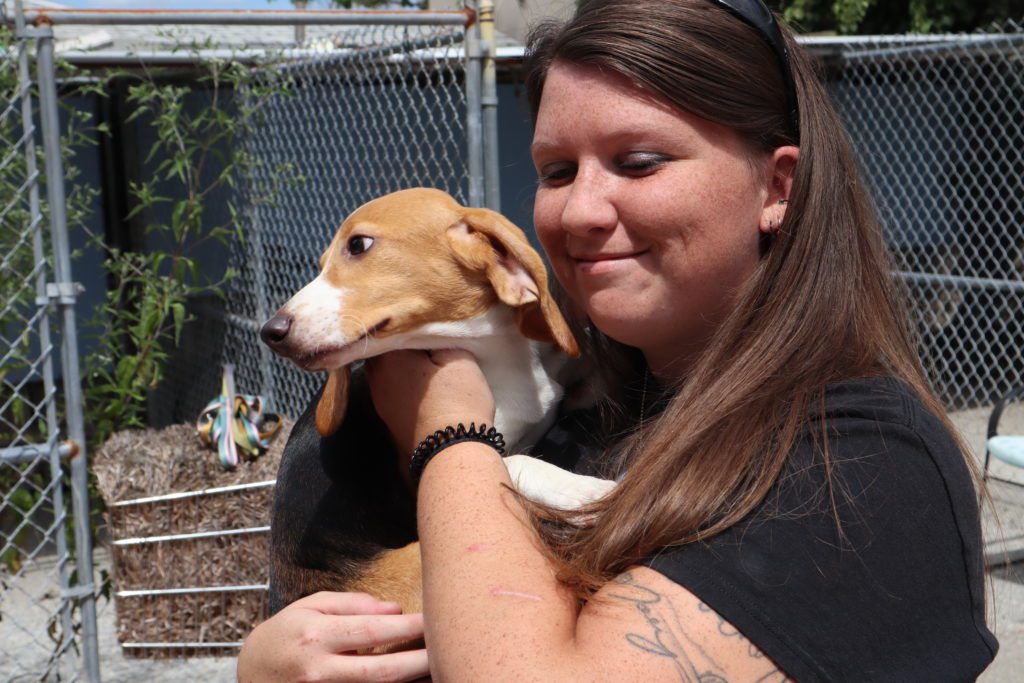 Faithful Friends has welcomed 13 beagles to its Germay Drive facility where they await adoption. Had they not been rescued from the breeding factory in Virginia, they would have been sold off to labs for pharmaceutical testing. (Charlie Megginson/Delaware LIVE)

Had they not been rescued, they would have been sold to laboratories for drug experimentation.

Of the 4,000 beagles removed from a Virginia breeding facility in the last month, 35 now call Delaware home.

Faithful Friends Animal Society in Wilmington was just one destination of three in the First State. The organization welcomed 13 puppies Tuesday, all between two and six months old, and invited Delaware LIVE News for an inside glimpse. 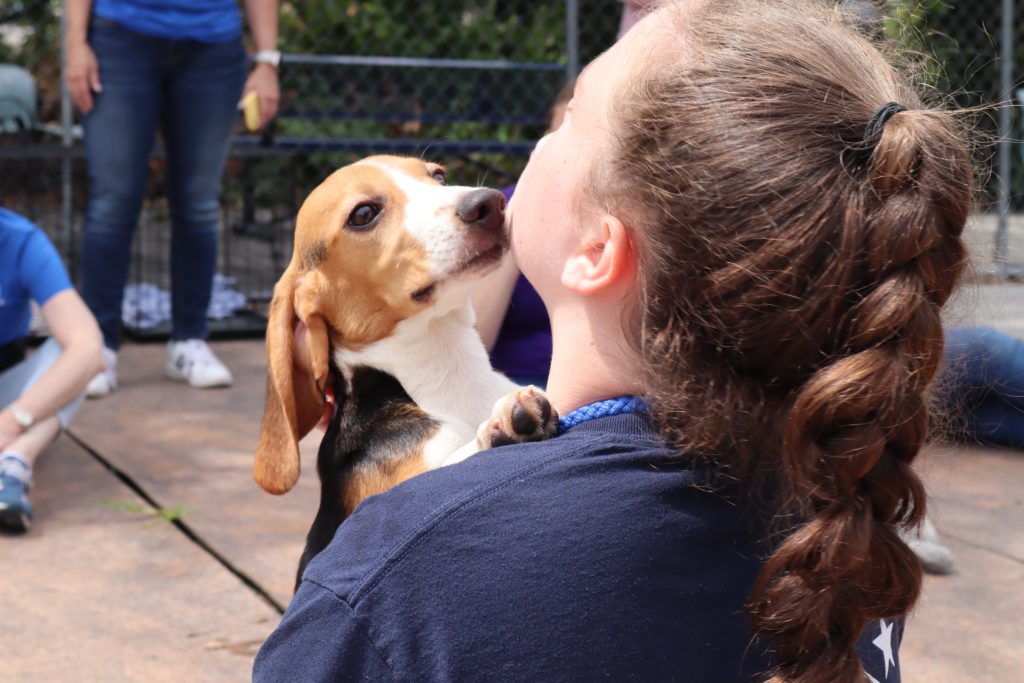 A 2021 PETA undercover investigation found the beagles had been permanently confined to small, barren kennels at an Envigo breeding facility in Cumberland, Virginia.

Subsequent government inspections found that beagles were being killed instead of receiving care for easily treated conditions, nursing mother beagles were denied food, the food they received contained maggots, mold and feces. Over an eight-week period, 25 beagle puppies died from cold exposure. 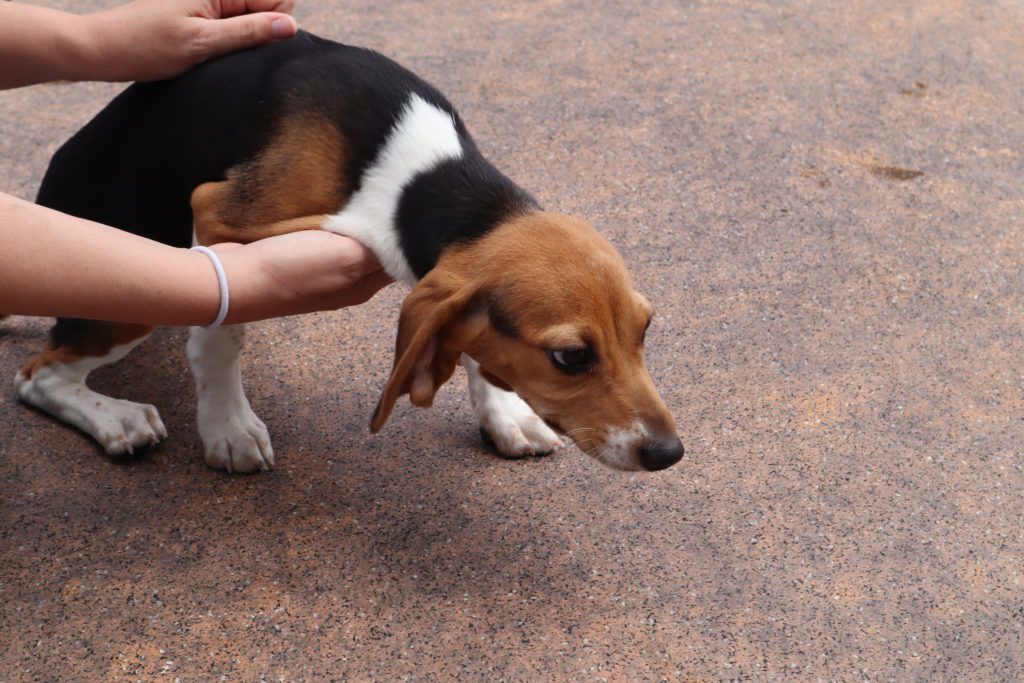 In May 2022, the U.S. Department of Justice sued the company alleging violations of the Animal Welfare Act.

Envigo settled the lawsuit without paying any fines and agreed to close the facility.

Until they arrived at Faithful Friends, the dogs had spent virtually no time outside. Their entire lives have been spent in wire cages. 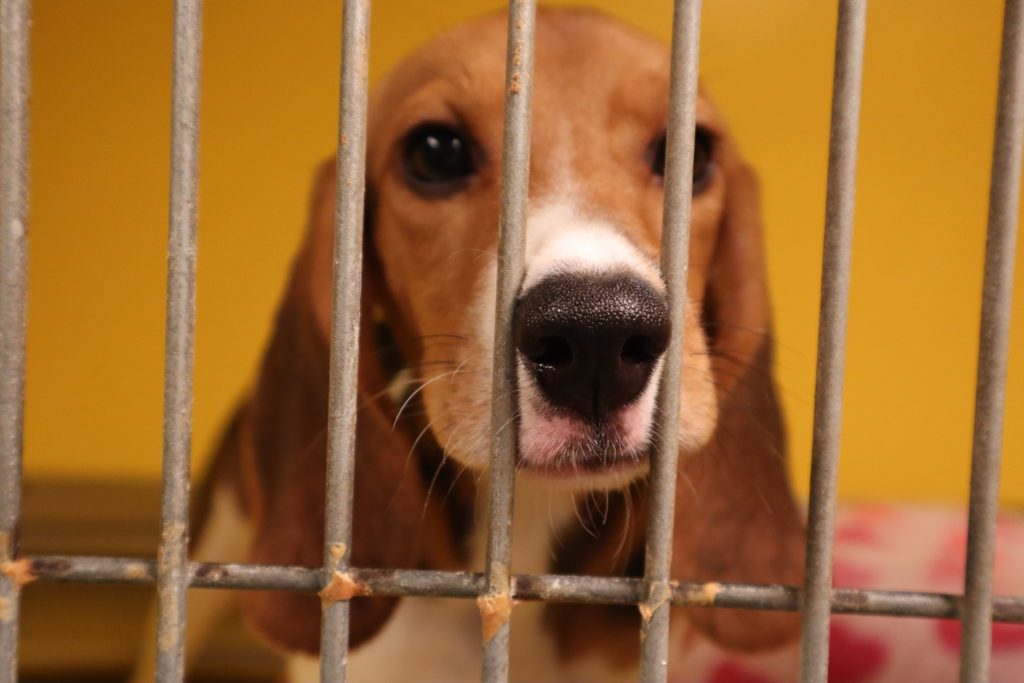 “Bearing in mind these dogs have unfortunately never felt grass, the sun on their fur, or love, Faithful Friends is prepared to invest a significant amount of behavioral resources into the beagles including bonding exercises from their training team,” the group announced Tuesday. “Our entire dog team staff will invest hours of time in the rehabilitation of these animals so they can live a fulfilled, happy life, with new forever homes.”

The dogs were greeted at Faithful Friends by hordes of employees, volunteers, and guests. They scurried around the enclosed yard, played with toys provided by the organization, and lapped up fresh water. 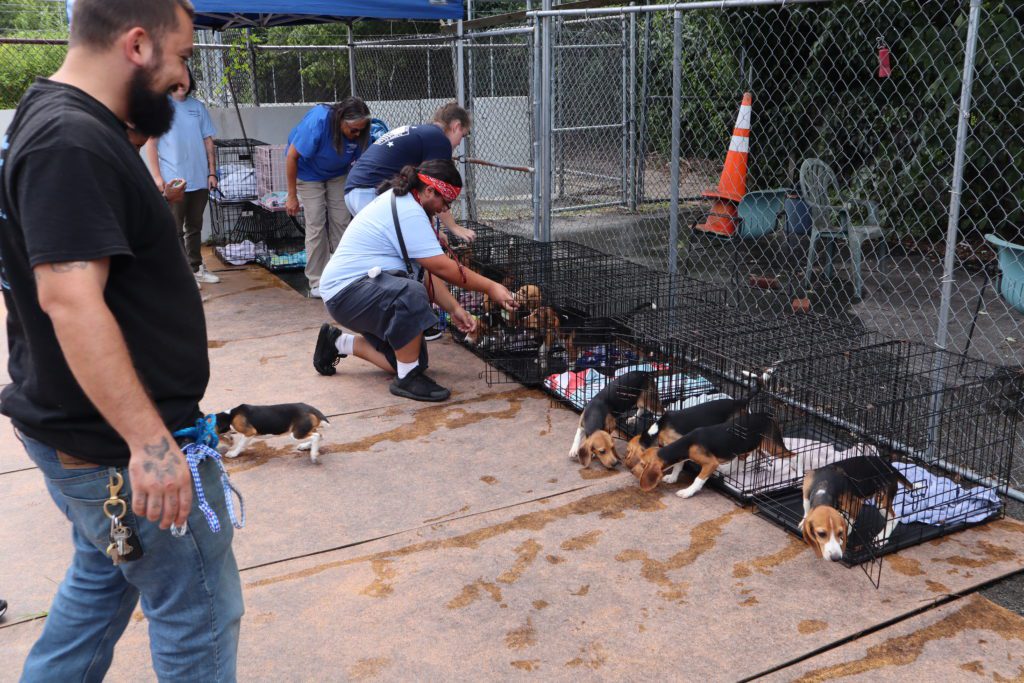 After running around for a while, the beagles were examined by a veterinarian, vaccinated, and micro-chipped to prepare for adoption. The dogs will be spayed and neutered. 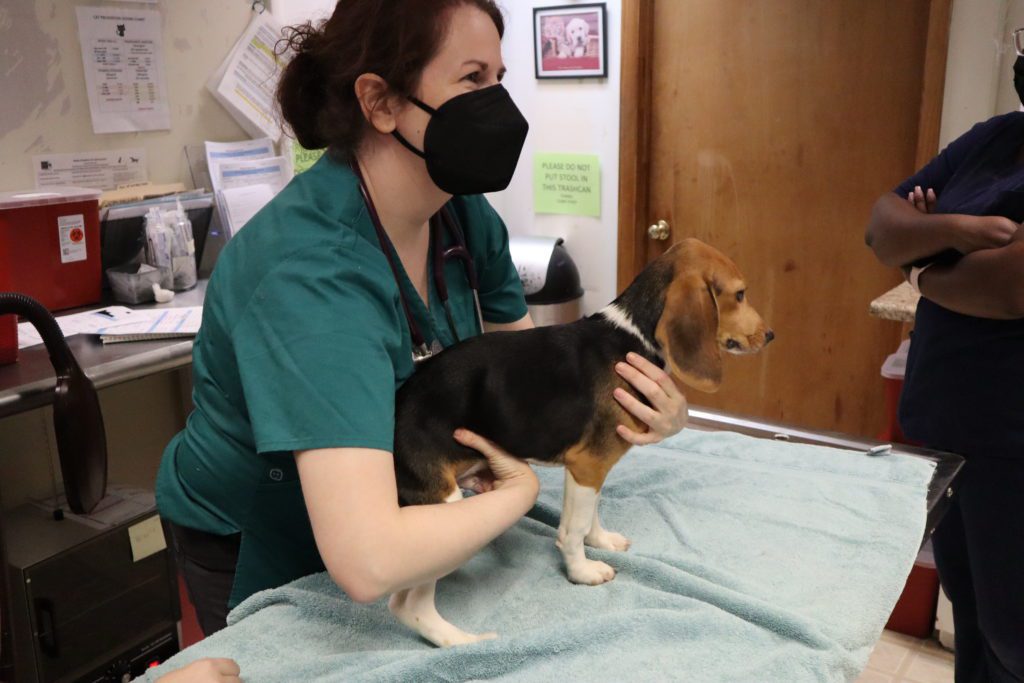 “All of the dogs, from the weaned puppies up to the moms, have tattoos in their ears,” said Audra Houghton, director of operations for the Humane Society of the United States’ animal rescue team. “That was their name for their entire life.” 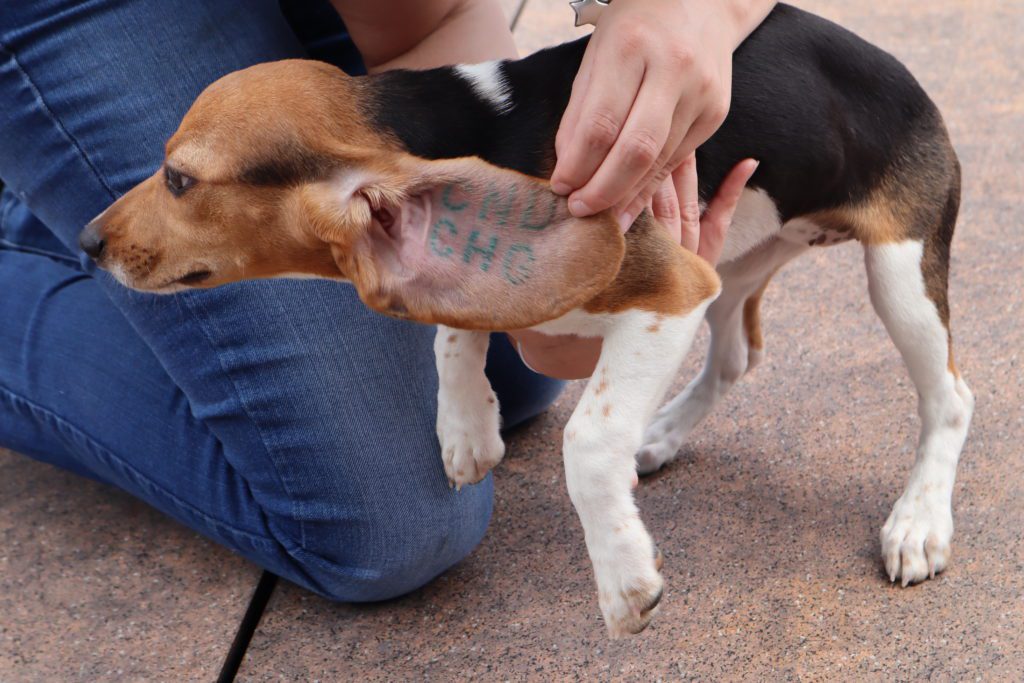 But as they’re adopted, they’ll no longer be numbers, Houghton said. They’ll be individuals with families who love them.

Jane Pierantozzi, executive director of Faithful Friends, said experimenting on animals is cruel because, like humans, they are sentient beings.

“They can give and receive love, and feel fear, pain, and joy,” Pierantozzi said. “Each one of these beagles is innocent and deserves love, protection, and care. We hope these rescue efforts raise awareness of policymakers for the beginning of the end to this practice of experimenting on living beings.” 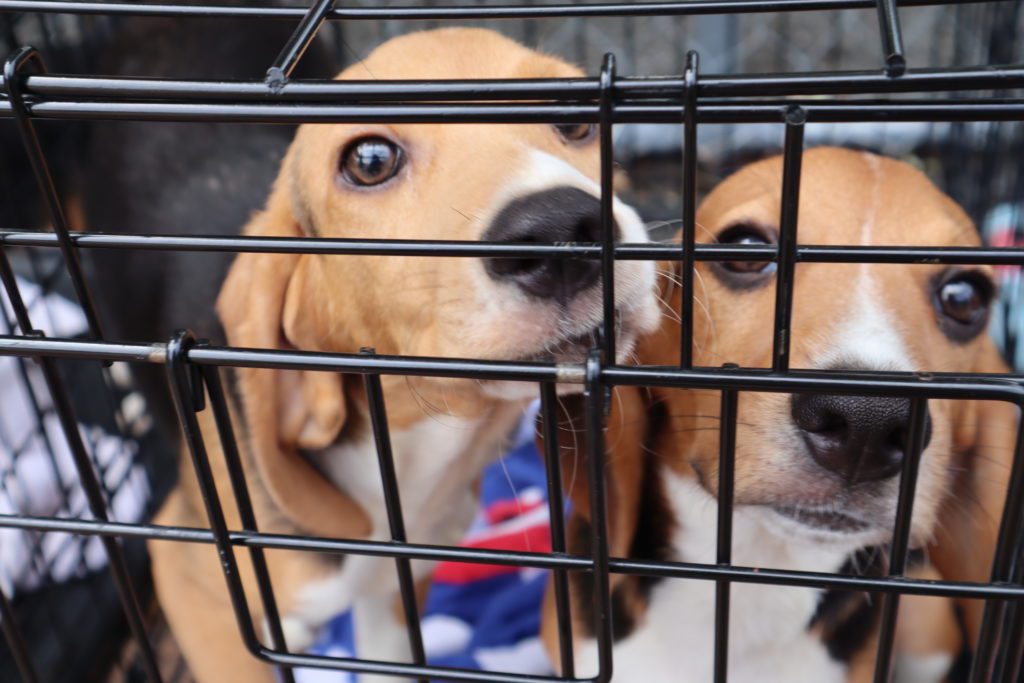 Faithful Friends is working to find foster homes to help transition the dogs into their forever homes.

If you are interested in fostering or adopting one of these beagles, you may fill out an application on Faithful Friends’ website and a member of staff will be in touch.

Unable to foster or adopt? FFAS has a goal of raising $10,000 for the beagles’ care. You can donate on their website. 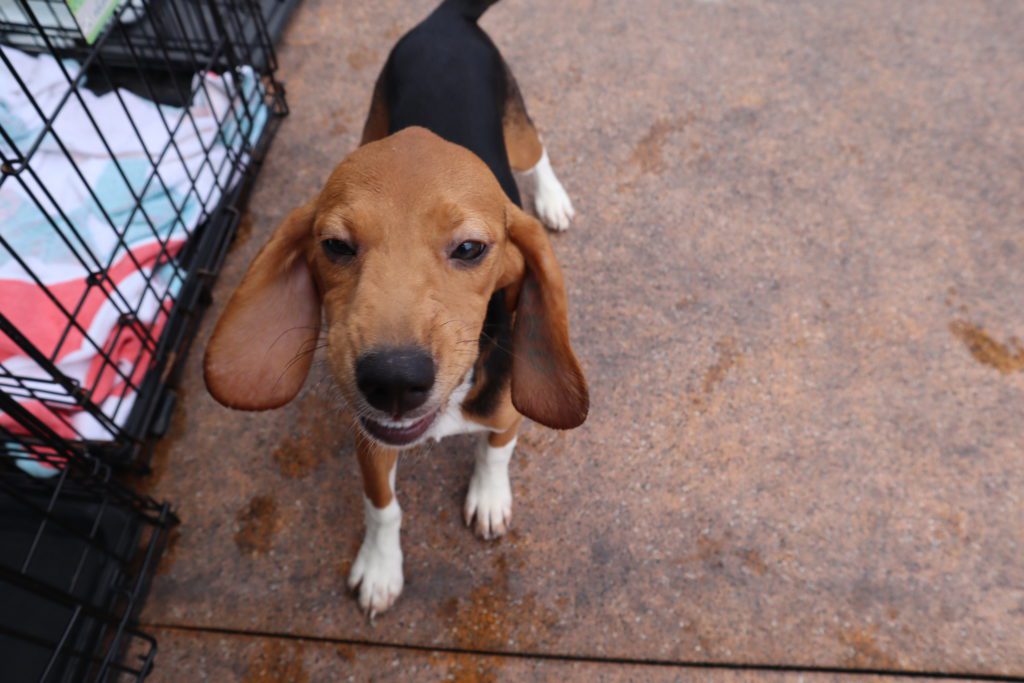