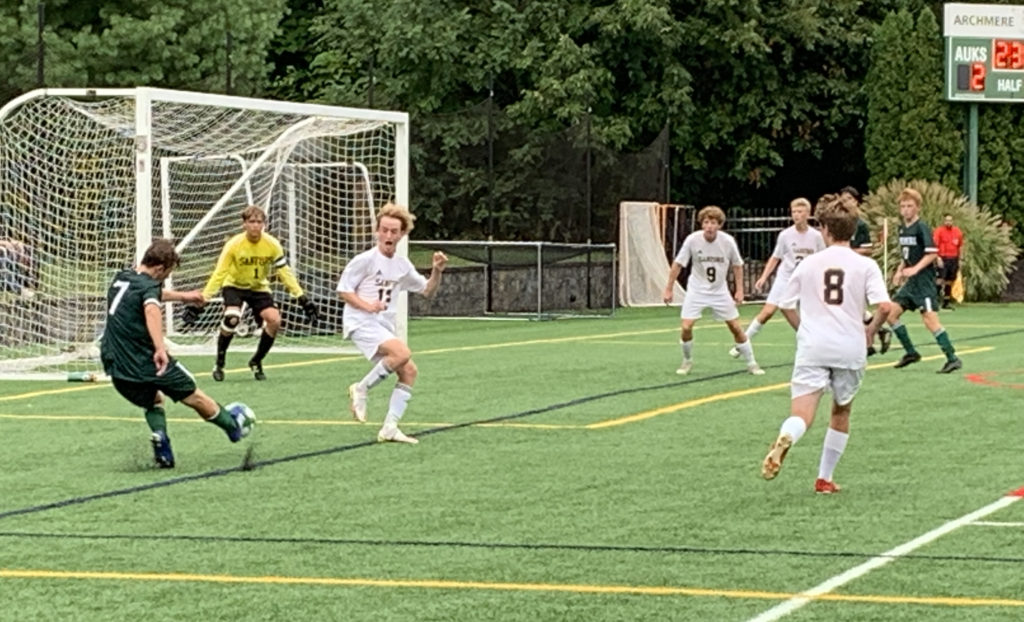 The Sanford Warriors visited Archmere on Friday afternoon for a boys’ soccer showdown between two teams with postseason aspirations.  Archmere struck early, scoring the first goal 2 minutes into the match. Things settled down a bit from a scoring standpoint but the pace of the game did not. The intensity level of both teams along with the wet turf surface  from the rain earlier in the day created an extremely fast pace that both sides seemed to prefer. Much of the next 20 minutes were played in Sanford’s defensive half as Archmere initiated attacks from deep in their defensive third, maintaining possession as they strategically moved the ball up the field. Then, in the 21st minute, Archmere’s Austin Curtis carried the ball up through the midfield, past Warrior defenders and ripped a left footed shot into the far side of the net past a diving Sanford keeper to put the Auks up 2-0.

The Warriors would get one back in the 16th minute of the half.  Sanford’s Brandon Lewis played a through ball around the Archmere defense to create a clean shot on goal from a tight angle. The initial shot was saved by the keeper but the rebound rolled right back to the center of the 6 yard box where Sanford’s Nai-te Watson was there to tap it into the back of the net. As the half came to an end, Sanford had another scoring opportunity as Brandon Lewis again played a through ball up the middle and fired off a shot from 11 yards out. The Auks keeper stuck his right leg out at the last second to send the ball just outside the goal post resulting in a Sanford corner.

The Auks ability to string together multiple passes became more evident at the beginning of the second half. Playing the ball back when necessary put Sanford on their heels as they were unable to maintain possession in their offensive third. The Auks pressure would eventually lead to a number of shots on goal. However, none made it past Sanford goalkeeper, Andrew Kedash, as he did his best to keep the score locked at 2-1. The Warrior defense was able to hit the release valve on occasion and play the ball forward but their inability to maintain any sort of possession made it only a matter of time before Archmere’s next scoring opportunity.

That opportunity came in the 19th minute as Archmere’s Ben Meredith found himself with the ball at his feet at the top of the Sanford 18 yard box. After a few touches, he sent a right footed blast past the left side of the Sanford keeper for the Auks 3rd goal of the game. Archmere midfielders controlled the pace through the middle third of the field as the half progressed. Midfielders Aiden Naughter and Miguel Rodriquez-Olmedo made their midfield presence felt throughout the match for the Auks with their skill and strong decision making ability. Archmere improves to 4-0 with the 3-1 win as they host Wilmington Charter on Wednesday. Sanford will also play Wilmington Charter on Monday as they look for their first win of the season.