An emergency airlift helped 60 cats and 50 dogs dodge Hurricane Ida by bringing them from Louisiana to Delaware.

The Brandywine Valley SPCA received the shelter animals Saturday before transporting them to their Delaware facilities.

The emergency airlift was originally scheduled to arrive at New Castle Airport Saturday morning but was diverted to Chester County Airport as President Biden headed to Dover Air Force Base where he welcomed home the bodies of the Navy and Marines troops slain in Afghanistan.

According to the Brandywine Valley SPCA, the animals came primarily from the Tangipahoa Parish Animal Shelter on a Wings of Rescue flight sponsored by Petco Love and the ASPCA. The cats and dogs were relocated to remove them from the storm’s path while making space in Louisiana for any pets displaced during the hurricane.

The Tangipahoa shelter is a high intake shelter in a rural area of Louisiana about 45 minutes north of New Orleans. BVSPCA has had staff members working at that shelter since January as part of a year-long collaboration to help increase life-saving efforts.

“We’re in a unique position to have a substantial rescue impact before and after Hurricane Ida because we have staff working in Louisiana right now,” said Adam Lamb, the Brandywine SPCA’s CEO in a press release. “We’re combining that with our close working relationships with national groups like Wings of Rescue, Petco Love and the ASPCA to help as many animals as we can before the storm and likely after.”

Chip Fitz, director of animal services at the Tangipahoa shelter said that by clearing out their kennels, they would be able to take in pets displaced by emergency evacuation orders.

“It will also give us space for the animal rescues that will more than likely take place after the storm from the storm itself and possible subsequent flooding,” Fitz said in the press release. “Without efforts like this, all of our southern shelters become overwhelmed immediately, which interferes greatly with our lifesaving efforts.”

Ric Browde, CEO of Wings of Rescue, which operated the flight, credited the mission’s success to their ability to have a number of planes and pilots ready to fly quickly.

“We are thrilled to be able to play a role in this emergency mission being conducted by BVSPCA in advance of Hurricane Ida,” Browde said. “We’ve seen much too often the devastating burden hurricanes and other natural disasters can place on local shelter facilities and know that early response is key to a successful outcome, not only for the dogs and cats, but the rescue personnel on scene, as well.”

The Brandywine SPCA is now tasked with finding homes for the evacuated pets. The organization has waived all adoption fees at all of its locations in an effort to motivate potential adopters to act quickly. 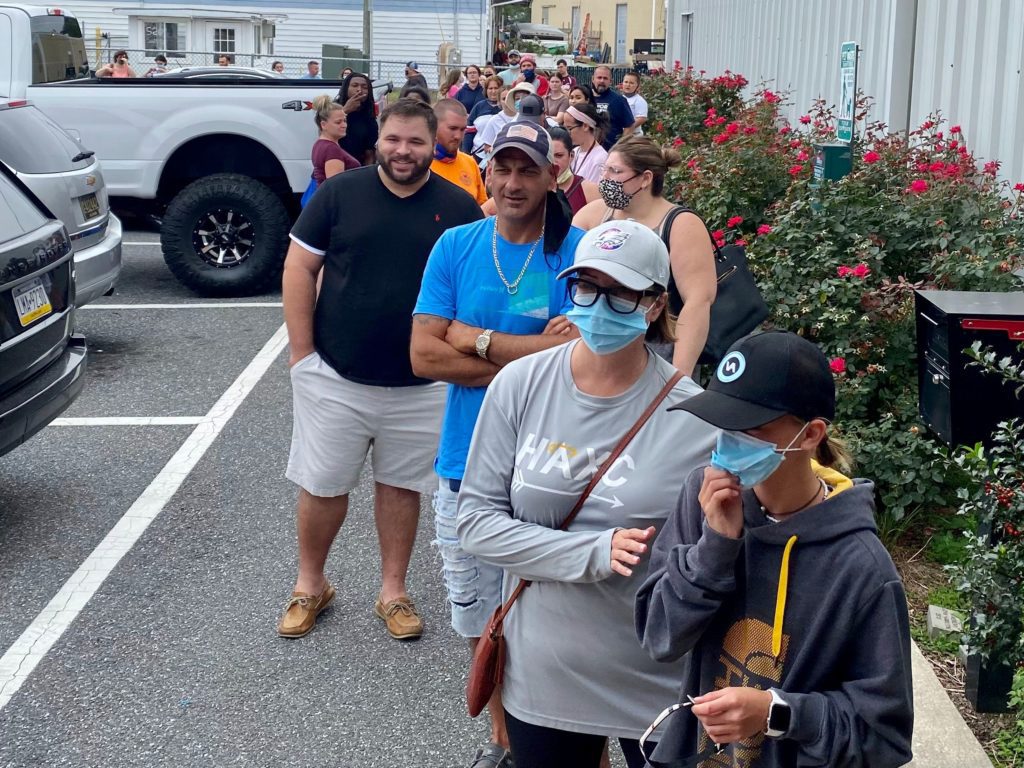 A line of people waits to adopt pets at BVSPCA’s New Castle campus on Sunday.

“Adopting one pet at this time saves the life of two,” said Linda Torelli, BVSPCA’s marketing director. “It rescues the cat or dog adopted while making space to relocate a hurricane victim.”

BVSPCA hit the ground running with 168 adoptions on Saturday and Sunday, according to Torelli.

The National Weather Service’s projected path for Ida indicates the remains of the storm will reach Delaware on Thursday.

For more, go to www.bvspca.org/hurricane-ida.